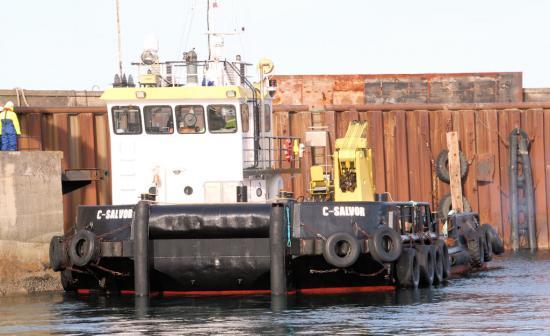 The vessel was there for Mojo Maritime Ltd of Falmouth, Cornwall and was in port to deploy three 'Acoustic Doppler Current Profiler' (ADCP) devices on the seabed of the Pentland Firth's Inner Sound.

This was undertaken for MeyGen Ltd, the company that holds the Crown Estate's seabed licence for that part of the Firth as a site for development as 'the world's first commercial tidal stream electricity power station'. It hopes to install almost 400 generating turbines, with a capacity rated at 1 MW (megawatt) each there, by 2020.

All of the lease site lies within 1.5 miles of mainland Scotland's most Northerly port.

Each ADCP device measures the velocity (speed) of the tidal streams throughout the 30 metre deep water column and logs their precise direction at every stage of the twice-daily tide cycle and of the fortnighly 'springs and neaps' sequence. It also measures wave heights and directions. The devices are powered by lithium-ion batteries and will be recovered from the seabed after 4 weeks of immersion, allowing the data collected to be analysed.

Graham Stewart, project manager with Mojo Maritime, a native of Eday, Orkney, proferred thanks to all concerned at Gills Harbour who had made the ADCPs installation go so successfully in fine weather.

Mojo Maritime, which specialises in marine operations management and has a consultancy 'arm', has devised a catamaran 'High Flow Installation Vessel' (HFIV) which it is bidding to utlise firstly in the Inner Sound for MeyGen Ltd.

Information gleaned from the ADCPs will provide algorithms for use .in the software precisely controlling her 'Voith-Schneider' DP (dynamic positioning) on-board system to match the exact conditions of the Inner Sound's tides and waves.

The vessel's design is almost complete and it enabled Mojo Maritime to win the 'Oscar' for technological innovation at the International Tidal Summit three months ago, in an open competition independently judged by industry 'peer reviewers'.

It claims that Mojo Maritime HFIV will be able to install (and later retrieve as necessary) the turbines at all stages of the tidal cycle, not just at periods of 'slack water' (i.e. on the tide-turn), as with existing much larger ships built for deep-water offshore oil and gas tasks.

The company, in partnership with Bauer AG of Germany, has also devised a flexible umbilicial-linked, on board bridge-controlled drilling system designed to complete 2 metre diameter bore-holes to a depth of 10 metres into the Caithness flagstone bedrock of the Sound, as 'bases' for cylindrical steel 'mono-piles'. An adapation to the rock-drilling device can affix the monopiles to the seabed and grout them securely into position.

About 8 metres of the mono-pile will project upwards from the seabed allowing the 'jacket' section holding the generating turbines to be firmly slotted into position.

Mojo Maritime's majority shareholder and MD is Captain Richard Parkinson, who formerly was a Merchant Navy master with experience in transiting the Pentland firth in winter conditions. The company hopes to base its multi-million pound HFIV at Gills Harbour as the tidal stream generating turbines installation gathers pace later in this decade.