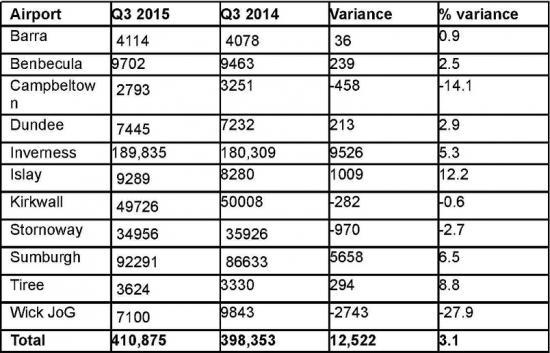 Airport operator HIAL's strong run of growth in 2015 continued in the last quarter according to latest figures.
In the third quarter (July to September), the group recorded an extra 12,522 passengers (up 3.1%) compared to the same period in 2014.

An increase in scheduled and charter traffic saw Islay claim the mantle as the fastest growing airport in the group, with an extra 1009 passengers, up 12.2% on 2014. Numerically, Inverness was the strongest performing airport, gaining an additional 9526 passengers during the quarter (up 5.3%) due to growth in the domestic market and increasing demand for the airport’s Dublin route.

Demand at Sumburgh rallied after dropping in the first two quarters of the year. An increase in energy related traffic saw passenger numbers rise by 5658 (up 6.5%) during the period though it remains to be seen if this growth will be sustained given the wider structural changes in the industry.

Dundee recorded a 2.9% increase in passenger numbers during the quarter as a result of steady demand for its Stansted service and the impact of the Open Championship in St Andrews. Passenger numbers also increased at Benbecula.
Numbers dropped slightly at Kirkwall and Stornoway. At Wick John O’Groats, following growth in the first two quarters of this year, passenger numbers fell in the third quarter. This was a result of a drop in energy related activity, reflecting the fluctuating nature of the sector. However, since the start of the year, overall demand at Wick John O’Groats has increased at a rate of 6.2%.

Inglis Lyon, Managing Director of HIAL, said: "These are strong figures for the quarter and show that demand on most services and at most airports is increasing. Inverness is continuing to perform well thanks to new and expanding services and we are working hard to provide even more choice for passengers. After a difficult start to the year, Sumburgh also enjoyed a strong third quarter.

“We are particularly pleased to see Dundee gaining in strength. The airport serves a vital role as a hub for general aviation and was an important gateway for The Open and, more recently, during the Alfred Dunhill Cup.

“The success of smaller island airports such as Islay, Benbecula and Tiree illustrates the important role that aviation plays in connecting remote and island communities. The arrival this summer of two new aircraft serving Barra, Campbeltown and Tiree is further good news for those communities."

The table highlights passenger numbers during the third quarter of 2015, compared to the same point in 2014:

Regional airport operator HIAL has handled more passengers than ever, according to latest figures for the last financial year.  The airport group, which operates 11 airports across Scotland, handled 1,437,625 passengers in 2015/16, up by more than 6000 on the previous year.
[Air / Bus / Rail / Ferry Services]
22/10/2014