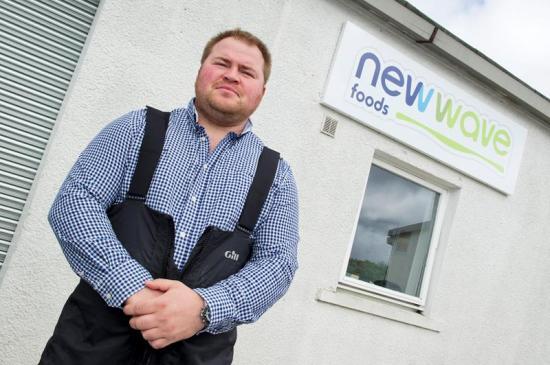 The first batches of seaweed have been harvested and processed by a new food and drink business in Wick.

New Wave Foods has invested £240,000 at its newly fitted out premises on the Wick Industrial Estate with support of £60,000 from Highlands and Islands Enterprise (HIE). The company turns wild-harvested seaweeds into edible products.

A full-time harvesting and processing manager has already been recruited and two other new staff have been harvesting seaweed around the Caithness coast since April. Up to nine jobs will be created within three years.

The business also has potential to generate future export sales for the north's valuable food and drink sector.

Seaweed is a valued food ingredient in other parts of the world and the market for seaweed products is considered to have significant potential in the UK and Europe. Trends point towards healthy eating awareness and growing consumer sophistication.

Peter Elbourne from New Wave Foods said: "The clean cool waters off the north coast provides the ideal natural environment for high quality nutritious seaweed to grow. New Wave Foods is proud to have created a sustainable harvesting policy to enable us to utilise this resource, while ensuring we take care of the natural environment. Indeed, we are proud to have already gained organic accreditation for our seaweed."

"Our new processing facility in Wick has already been fully commissioned and is today busy processing locally harvested species of seaweed. With increasing demand for seaweed stretching across many sectors of the food industry, we look forward to growing the business from our Wick base substantially in the coming months and years."

HIE's assistance has been provided towards harvesting equipment and refitting the factory unit to the necessary standards.

“New Wave Foods will make a significant contribution to the prosperity of the Wick area by providing local jobs where few alternatives currently exist.

“I’m encouraged to see this company establishing a new, innovative industry in the area. This helps support the aims of the Caithness and North Sutherland Regeneration Partnership to build a strong and diverse economy.”