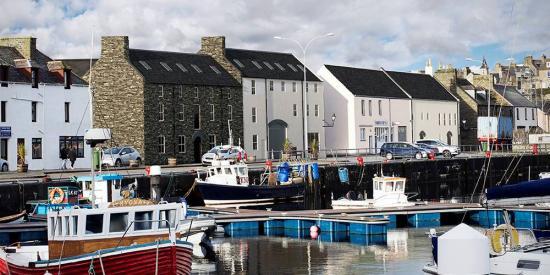 Beatrice Offshore Windfarm Limited (BOWL) has begun renovating its new home in Wick with the help of a neighbour.

Two buildings in Lower Pulteneytown are being redeveloped into the Operations and Maintenance (O&M) base for the £2.6bn Beatrice offshore wind farm project.

The two buildings were originally designed by renowned Scottish engineer Thomas Telford in 1807 to support marine work in Wick and will soon be brought back to maritime use once complete in 2018.

The O&M base will support the Beatrice project and will be home to a number of long term employees, offering opportunities for everything from Offshore Technicians to Office Administrators to help keep Beatrice turning.

But it's not just completion of the base that will bring local benefits. BAM Nuttall, principal contractor of the O&M base works, recently announced their subcontractor for the initial demolition and preparatory works for renovation; GMR Henderson, who are helping them in their work to sympathetically restore the buildings.

With a head office only round the corner from the Telford buildings and a reputation of providing excellence in building services throughout Caithness and Sutherland, GMR Henderson bring knowledge and expertise to the development.

Gerald Henderson, Director of GMR Henderson, said: "These Thomas Telford buildings have stood in Wick for over 200 years and their sympathetic renovation is very important to Wickers like myself so we are very pleased to have been awarded a contract to start the renovation works.

"Of course there are many benefits to working on a project round the corner, not just the small commute in the mornings, but that we can be part of a project that, when completed, we will be able to see and take pride in every day."

Steve Wilson, Beatrice Project Manager from SSE, said: "It's very important to the Beatrice team to bring benefits to the community, both during operation and construction.

"We really look forward to working with BAM Nuttall and GMR Henderson and I know their enthusiasm and expertise will help us deliver a fantastic project for both Beatrice and for Wick."

The news was warmly welcomed by Gail Ross MSP for Caithness, Sutherland and Ross. She said: "The news that this project is moving forward at pace is great for the area.

“I met with SSE recently and heard about future plans, including building improvements, jobs and apprenticeships. It's also fantastic that local companies are due to benefit from the massive amount of work that will transform the harbour in the coming months. I welcome the involvement of GMR Henderson in such a hugely important project.

“I commend Wick Harbour and SSE for their ongoing engagement with the community and look forward to seeing the results of the extensive improvements. I was also happy to hear about the level of applications that have been submitted for the various roles in all aspects of the project. This has the potential to have long lasting benefits for East Caithness and its importance cannot be underestimated."

Shows how the buildings at Wick harbour will look once work is completed.

Gills Harbour Ltd, the community-owned body that owns & operates the busy little port on Caithness's North Coast, has awarded a remedial contract to a Wick-based company.   The deal, won in a competitive tender, has gone to builders/civil engineers Messrs GMR Henderson Ltd, of Martha Terrace in Wick.
[Marine Services]
17/6/2017

Today at Wick Harbour 'Rix Lynx'could be seen tied up.   Wick Harbour is fast becoming a hive of activity with the work now well underway at the former Steven's yard.
[Marine Services]
11/9/2016

Wick Harbour Authority's ambitious plans to attract new jobs to the area from the offshore wind industry have received a boost with the combined support of £450,000 from two partners in the Caithness & North Sutherland Regeneration Partnership (CNSRP).   The Harbour Authority is positioning the port to attract business from the two large offshore wind developments in the Moray Firth, and is currently working on a multi-phase programme to ensure that its facilities meet the requirements of industry.