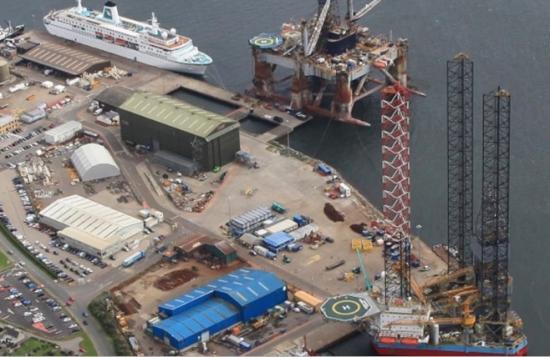 This follows the recent announcement of a £10 million contract from Moray East Offshore Windfarm to become the intermediate port for their 95-turbine development. The new quayside will generate over 140 new jobs across the Highlands and Islands.

The new 218m quayside and 9 acres of laydown area has been designed as a new energy and cruise hub and will be completed by 2020. It will not only be able to accommodate large scale renewable, decommissioning and oil and gas projects, it will also be able to berth the largest cruise ships currently being designed and built.

Bob Buskie, Chief Executive of the Port of Cromarty Firth said: "This is tremendous news for the Port and the Highlands and it represents a significant investment by the Board. As a Trust Port, all of our profits are reinvested in the Port's future development. We believe this investment will be help bring new work to the area for decades to come. This is already starting, with last week's announcement of the Moray East Offshore Windfarm contract.

"The team at the Port have been working for two years on this project and we couldn't have done it without the help of the Scottish Government, Highlands & Islands Enterprise, Royal Bank of Scotland and, of course, our new partners Moray East. Everyone collaborated to make this happen for Scotland and the Highlands and I would like to thank everyone on behalf of the Port’s Board for their hard work and commitment to the project.

Bob added: “There is a substantial demand for the services in the Port and, even with the large new quayside and laydown area finished in 2016, we still experience capacity issues. This new Energy and Cruise Hub will help us resolve these problems and open up the Port to being able to accommodate large scale projects from across all sectors."

Fergus Ewing MSP for Inverness and Nairn commented “This is excellent news and a result of hard work by the team at PoCF. I am delighted they have won this crucial contract and this will provide a real boost to the Port and the wider Highland economy."

The new quayside will be funded jointly by the Port and HIE, including support from the European Regional Development Fund, and with help from the commercial lender RBS.

Charlotte Wright, Chief Executive of HIE, said: “We are delighted to be supporting this significant expansion by the Port of Cromarty Firth.

“As well as enabling the port to fulfil its latest major contract for the Moray East windfarm project, this investment will also put it in a strong position to win further business in the energy sector and expand its capacity in the growing cruise ship market.

HIE has approved £7.75m grant funding to the project over the coming years. £2.3m of this total is being contributed by the European Regional Development Fund (ERDF), and an application for a further £800,000 ERDF funding is under consideration. The HIE package also includes £2m of additional funding from the Scottish Government.

“Port of Cromarty Firth is a key success story for the north and highlands economy, and this new tranche of investment will ensure it continues to thrive and build upon its role as a premier supporter of the industry’s largest rig inspection, repair and maintenance (IRM), subsea and renewables projects.

“We look forward to seeing its vision become a reality and allow the regional economy to continue on its upwards trajectory by supporting and creating hundreds of jobs both directly and indirectly.”

Oscar Dias, Project Director for Moray East said “There is no automatic reason why a windfarm needs to be built from a local port, indeed there are examples of windfarms which have been built from beyond the UK altogether. The efforts of Port of Cromarty Firth cannot be understated in securing this contract for Scotland and the Highlands. They won this contract against stiff competition including well established ports already undertaking this work.”