Benefits Delivery In Scotland Set To Get Much Harder 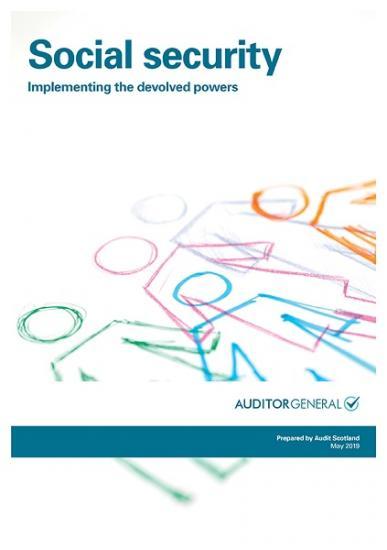 Report on Scotland's Social Security system published today 2 May 2109. The report highlights the difficulties ahead as it prepares to take on further benefits.

1.4 million - People expected to receive payments from Social Security Scotland every year, once all devolved benefits are implemented.

320 staff - Employed by Social Security Scotland since it was established in September 2018.

£87 million - Spent to date on implementation by the Scottish Government

30 per cent - Posts within the social security programme have been vacant.

The Scottish Government has done a good job of delivering its first set of devolved benefits, but the real challenge is still to come, says the spending watchdog.

Carers and new parents successfully received payments in 2018 and the country's new benefits agency, Social Security Scotland, was set up. But bringing in early benefits was harder than expected.

The Auditor General for Scotland says the government does not yet have a clear picture of what will be needed to make the next, much more complex, set of benefit payments.

Constant short-term pressures and a high pace of work has left civil servants little time to pause and refocus their activity. That poses risks to the overall delivery of future benefits.

Caroline Gardner, the Auditor General for Scotland, said:"The government has done well to date but has had to work flat out to reach this point, leaving little time to draw breath and plan for the challenges ahead.

"The social security team is doing the right things to address that issue, but it hasn't yet got a clear understanding of what's needed to deliver the more complex benefits to come, or how much it will cost. Many decisions about future benefits are still to be made and it's critical that detailed plans are now put in place."

The Scottish Government has done well to establish a new agency and start making benefit payments. It has also undertaken important groundwork needed to deliver future benefits in line with its overall policy direction. But the high pace of delivery and the complexity of the social security system has been a significant challenge and meant that the Scottish Government found delivering on its initial commitments harder than expected.

Implementing the second wave of benefits is more difficult as the complexity and amount of work increases further. This means a significant change for the implementation programme. The processes and systems currently being used to plan and support implementation have worked well to date. But they will not be enough to support the delivery of the second wave.

The Scottish Government does not yet have a clear understanding of the key things needed to deliver all remaining benefits in the way it intends. This includes not monitoring and reporting on how much it will cost to fully implement all the benefits. It is currently developing financial and workforce plans to support its implementation timescales. It is critical that these are agreed and aligned to the intended outcomes for service users.

Recommendations in the report -

The Scottish Government should:

fully develop the critical path of planned actions to support the timetable for the delivery of all future benefits. This should include realistic and sustainable timelines for procurement, key decision points, and more short-term detail of the planned activity and timescales for wave two benefits

finalise, as a priority, revisions to the programme business case. Develop aligned workforce and finance plans to support delivery timescales and intended outcomes

include a clear estimate of the overall costs to implement the social security system, reflecting decisions made and public commitments. This should be updated regularly and reported to the programme board

complete the proposed finance review urgently, ensuring that this results in a greater focus on managing total implementation costs alongside the timetable and the quality of outcomes.

The full report highlights many problems to be dealt with not least the failure to recruit 30% of the staff required to run the system and having to resort to outside contractors.

Costs are higher than expected.

116. For 2019/20, the programme estimated that it would need a budget of £118 million. The programme was allocated an initial budget of £78 million. Managing expenditure within this budget is challenging given the level of activity anticipated. The Scottish Government has a process for reviewing and revising budgets within the year. Where there are in-year revisions to the budget, these need to be transparently reported to the FRB and programme board. This should include a clear explanation of what any additional funding has been allocated for and any impact on longer-term plans and costs of the programme. It is also important that any significant changes are transparently reported to the Parliament as part of revised budget reporting arrangements.