Do Renewables Provide An Answer To Climate Policy Trade-offs? 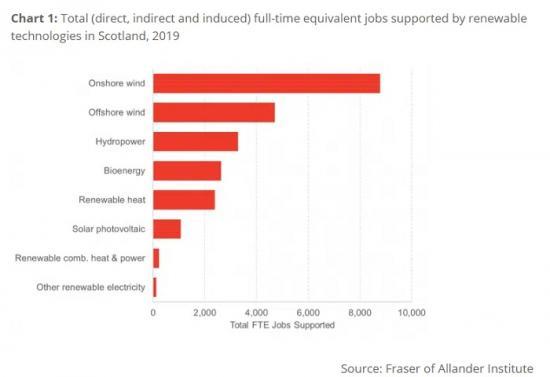 With COP 26 coming to an end in Glasgow this week, the climate is firmly back on the international agenda and a step change is required to avoid the very worst impacts of climate change.

Domestically, the UK and Scottish Governments have committed to net-zero targets by 2050 and 2045 respectively. But how will these be achieved?

In some regards, the success so far of decarbonising much of Scotland's electricity supply is the easy part. Most people have noticed little change in their day-to-day lives as a result.

Undoubtedly, to reach our net-zero targets will require difficult but essential decisions to be made, both now and in the future. This will mean challenging how we travel, how we heat our homes, the structure of local economies, and potentially our cost of living over the medium term.

Trade-offs undoubtedly exist between Scotland's current economic structure and its net-zero ambitions. But the transition to net-zero should not be seen in isolation as a grim picture of difficult decisions.

Opportunities to minimise these trade-offs will not only mitigate potential damage to people's livelihoods but, by reducing resistance to far-reaching change, can help Scotland combat climate change.

Lessons from Aberdeen
For evidence of this, we can travel back in time to the 1960s and early 1970s Aberdeen. Male wages in Aberdeen were over 10% lower than Scotland and UK averages, while the area experienced widespread emigration.

The Forties Oil Field was discovered in 1970, and the first oil was produced by 1975. This marked the starting point of the upheaval in Aberdeen’s economic structure.

Less than a decade after the oil started flowing, one in four jobs in Aberdeen were oil-related.

The potential for renewables to provide significant but sustainable opportunities for many local economies cannot be understated.

However, we cannot expect to sleepwalk into prosperity. Seizing the full economic opportunities of renewables not only means building wind farms and solar panels it also requires a robust domestic renewable supply chain.

Part of this can be attributed to the slow-moving nature of internationally agreed economic classifications, which determines how many of the Scottish and UK Governments’ key datasets are produced. There is no such thing as a renewable energy sector, for example.

The Office for National Statistics has responded by producing a survey to better understand renewables - the Low Carbon and Renewable Energy Economy survey. However, the lack of a renewable energy sector embedded into National Accounts makes it challenging to understand how other industries interact with renewable activities and, in turn, the true economic impact.