Week Commencing 29 April 2019.   Energy & Business Services: As we see positive progress with the Beatrice Offshore Windfarm development, and the development of both Moray East and West projects, a new initiative to support supply chain companies to learn more about opportunities will be held in Thurso on 13th May.
[Other Public Services]
3/5/2019

US and UK complete project to remove highly enriched uranium

The Nuclear Decommissioning Authority and US Department of Energy's National Nuclear Security Administration (NNSA) have completed the transfer of around 700kg of highly enriched uranium (HEU) from Dounreay, in the north of Scotland, to the US.   The HEU transfer, from Dounreay to the United States, was announced by the UK Government as part of its commitment to the 2016 Nuclear Security Summit held in Washington DC.
[Other Public Services]
30/4/2019

Leask Marine have recently completed the decommissioning of the redundant 160 tonne Ola Pier linkspan as part of the redevelopment at Scrabster Harbour, Caithness.   The project included the preparation works of dismantling of the linkspan ramp from the existing pier, placing in temporary support beams to the linkspan prior to the cutting works, removal of the tar from the linkspan road surface, cutting and dismantling the support towers and cutting the actual linkspan into firstly pieces.
[Advisory / Counseling Services]
28/4/2019

Weeks commencing 8th-22nd April 2019.   Energy & Business Services: It was good to see the announcement this week by Dounreay that its Decommissioning Services Framework had gone live.
[Other Public Services]
24/4/2019

Dounreay Site Restoration Limited (DSRL) has opened the door to dozens of companies to play an active role in supporting the delivery of Scotland's largest decommissioning project.   Construction of a size reduction facility, shaft and silo decommissioning and demolition of historic active laboratories are just some of the major projects expected to be delivered as part of a decommissioning services framework, potentially worth up to £400 million, which was announced on Tuesday 23rd April 2019.
[Other Public Services]
18/4/2019

Help halt the harm doorstep criminals cause in your community.   Independent charity Crimestoppers is today launching a campaign to raise awareness of Doorstep Crime and encourage people to pass on any relevant information 100% anonymously.
[Advisory / Counseling Services]
12/4/2019

Week Commencing 8th April 2019 Energy & Business Services: It was good to see this week in the Press & Journal's Energy Voice a piece confirming the transformational impact that the Beatrice Offshore project is having on Wick.  It is a timely reminder that although the £2.6Bn project is nearing the end of its construction phase, the economic impacts in the north will continue over the lifetime of the project through the operations base in the restored harbourfront buildings in Wick, which will be home to around 90 workers.
[Advisory / Counseling Services]
29/3/2019

Week Commencing 25th March 2019 SpaceHub Sutherland: The team's weekly presence in Tongue continued this week, and June Love from the team also delivered a presentation on the project to members of the Thurso & Wick Trades Union Council at its meeting this week.  I attend all of the Trades Council's meetings, so it was good to hear the unanimously positive reaction to June's update from members (see Communications below for feedback on my discussion with members).
[Advisory / Counseling Services]
23/3/2019

Week Commencing 25 February 2019 Energy & Business Services: The Beatrice Offshore Windfarm project has passed the 75% mark in its construction phase with the installation this week of the 63rd of 84 turbines The company is also currently advertising for a Wind Turbine Engineer to be based at Wick.   http://ssejobs.co.uk/caw/en/job/519979/wind-turbine-engineer Enabling activities: Caithness Chamber of Commerce - in its role as Europe Direct Information Centre (EDIC) for the North Highlands, Orkney and Shetland - hosted a Brexit Business Breakfast in Thurso today (Friday).
[Other Public Services]
1/3/2019

The fund is provided by the Nuclear Decommissioning Authority and administered by Dounreay in association with the Dounreay Stakeholder Group.   Community organisations or charities that benefit people in Caithness and North Sutherland may be eligible for assistance from the Dounreay Communities Fund.
[Other Public Services]
1/3/2019

The first blocks of concrete have been removed from the top of one of the world's most recognisable chimneys.   This marks the start of the demolition of Sellafield's Windscale Pile One stack.
[Other Public Services]
28/2/2019

The cost of Police Scotland's junked phone hacking kiosks is likely to rise again as the force considers taking legal action to prove it did not breach privacy laws.   It spent £370,684 last April on 41 of its cyber kiosks, which let officers copy data from mobile phones, but the plans were shelved following an outcry from privacy campaigners, The Times reports.
[Other Public Services]
24/2/2019

Police Scotland can confirm that two men have been charged in relation to two vehicles detected travelling at 131mph on the A9.   The two vehicles were seen by road policing officers near Arpafeelie on the Black Isle north of Inverness shortly after 11.15pm on Wednesday, February 20.
[Other Public Services]
23/2/2019

Drugs worth more than £820k seized during Op Ram 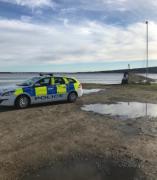 Drugs with a street value of more than £820,000 have been seized throughout the Highlands & Islands during a four week period of enforcement in January and February.   Officers have been carrying out targeted activity aimed at removing illegal drugs from the streets - while causing extensive disruption to those intent on trafficking and dealing.