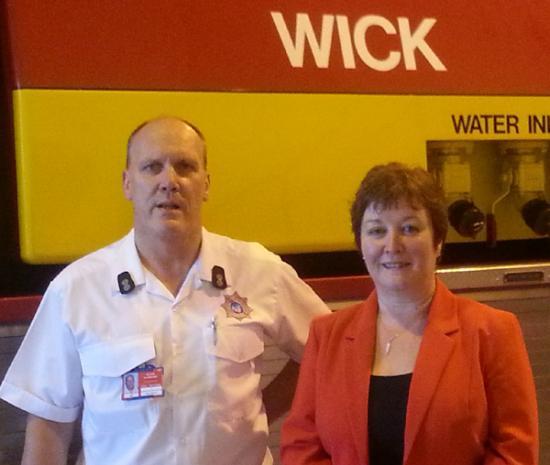 Visiting Wick John O’Groats Airport recently, Highlands and Islands (Scottish Labour) MSP Rhoda Grant has praised the boost in airport usage by around 120 % due to the increased demand from the energy industry.

The strong growth at Wick John O’Groats is the result of increased energy traffic and growing demand for scheduled passenger services.

Following a meeting with Airport Station Manager William Sutherland to discuss the increase in numbers and the future of the airport, Rhoda Grant MSP said:

“The continual increase in passenger numbers at Wick John O’Groats Airport is great news for Caithness and the North of Scotland.

“The Airport is going from strength to strength and helping develop both business and tourism across the county. Increased capacity between John O’Groats and Edinburgh will hopefully bring in more visitors to the far north.

“The announcement by ‘Lonely Plant’ that Scotland is one of the top three destinations to visit in 2014, coupled with events such as the Commonwealth Games taking place in Glasgow, provides a great opportunity to encourage more people to take the journey north and visit Caithness whilst they are in Scotland.”

Flybe's franchise partner Eastern Airways has flights to Wick from Aberdeen and would have been in danger if the company had gone bust.   Flybe has agreed ÂŁ110m rescue deal.
[Air / Bus / Rail / Ferry Services]
6/3/2019