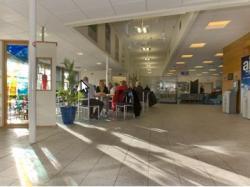 Wick airport is one of 10 airports controlled by the company. Scheduled services operate to and from Edinburgh and Kirkwall Monday to Saturday and Aberdeen twice daily Monday to Friday. Additionally charter flights, oil related helicopters, military training, ferry, private and club flights operate on a regular basis. Two flying schools operate from the airport. In the terminal building the 'FliteBite' cafe and Practical Car are available to off and on airport users.

The centralisation of air traffic services in the Highlands was the fore again yesterday at the petitions committee of the Scottish Parliament on Wednesday 24th February 2021.   The importance of the issue for outlying areas in terms of connectivity and employment were highlighted.
[Air / Bus / Rail / Ferry Services]
22/7/2020