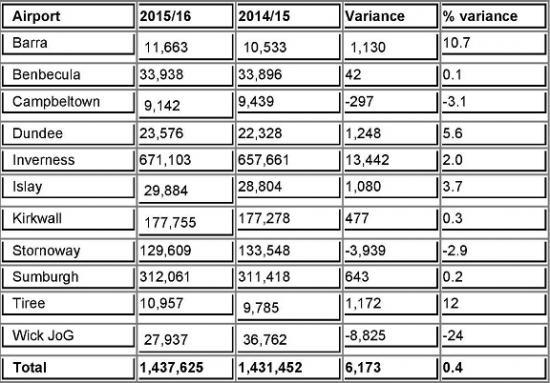 Regional airport operator HIAL has handled more passengers than ever, according to latest figures for the last financial year.
The airport group, which operates 11 airports across Scotland, handled 1,437,625 passengers in 2015/16, up by more than 6000 on the previous year. Inverness Airport, the busiest in the group, added more than 13,000 passengers during the year. Smaller island airports such as Tiree and Barra - this year celebrating its 80th anniversary - enjoyed strong growth, with passenger numbers up 12% and 10.7% respectively. Dundee, where Flybe is about to launch a new Amsterdam service, also performed well.

Inglis Lyon, Managing Director of HIAL, said: "This has been a good year for HIAL's airports. Despite the downturn in the energy sector, a key market for HIAL, passenger numbers increased during the year.
“Our smaller island airports performed extremely well, as did Inverness and Dundee, both of which will see expansion in the coming months as a result of new routes.

“We have worked hard to improve connectivity across our group, with new aircraft serving the communities of Barra, Tiree and Campbeltown and new air services due to launch at Inverness and Dundee. As a result of our strengthening route network, regional Scotland is now better connected than ever before."

Meanwhile, figures for the first quarter of 2016 show a drop in passenger numbers across the group, a result of the downturn in energy sector traffic at Wick John O’Groats and Sumburgh airports, and the loss of Flybe’s Inverness to London City service, which operated in the first quarter of 2015 but was then discontinued. However, the new financial year is expected to be one of the busiest in Inverness Airport’s history as easyJet expands and British Airways and KLM launch new flights to Heathrow and Amsterdam respectively. Holiday airlines Thomson and First Choice have also confirmed new summer flights to Majorca in 2017.

Prospect has confirmed arrangements for balloting air traffic controllers at Highlands and Islands Airports Limited on industrial action.   The ballot will open on 11 February and close on 1 March.
[Air / Bus / Rail / Ferry Services]
1/11/2015