Wick Town Centre Getting A Huge Clean Up 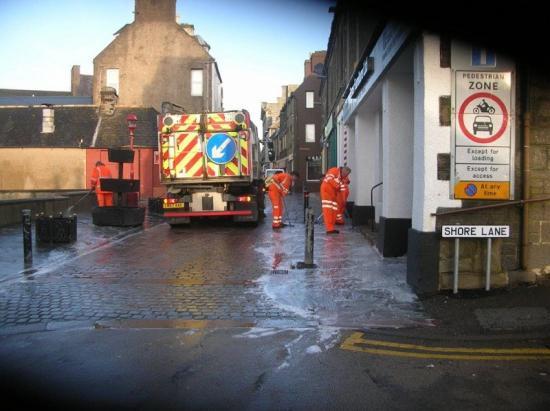 Wick town centre is set to sparkle following a deep clean of the High Street area.

The deep clean started on Monday morning and will be completed on Friday 31st May 2019.

There are 5 staff involved daily in the cleansing operation, which is essentially a pressure wash which includes a detergent being fed through the tank of a mechanical street sweeping vehicle. Litter collection takes place daily anyway, so the deep clean will focus on the cleansing of pedestrian areas. The aim is to clean and remove any stains such as residual marks caused by liquid spillage and the clean will also remove any existing bird mess.

Chair of the Caithness Committee Cllr Matthew Reiss said: "I am delighted to see the street being brought back to pristine condition and wish to thank the efforts of all the staff involved. We all want to live in a clean and litter-free environment so I hope that everyone will help us keep it that way."

The town centre is already coming under the focus of local businesses with meeting already held with councillors. A public meeting follows shortly for members of the public to have their say on how to improve Wick town centre.

Plans for a town centre regeneration in Wick have taken another step forward with the announcement of two further stakeholder meetings.

On Tuesday 28 May, town centre retailers are invited to join Ward 3 councillors and Highland Council officers for a workshop exploring some of the key themes identified during the first round of engagement, which took place on 16 May. More than 50 retailers and businesses attended this initial meeting, where there was a constructive and mostly positive discussion of key issues affecting the town centre and hopes for its future.

Two key themes which emerged were that of traffic management and business rates. To that end, Ward 3 councillors have organised a focused two-part workshop to explore these issues in more detail, with officers present to answer questions and aid discussion. The workshops will take place at 7.30pm on Tuesday 28 May in the Norseman.

Meanwhile, councillors have also set a date for a meeting with wider stakeholders and the general public. This meeting has been set for Monday 10 June at 7.30pm in the Mackays Hotel. It will provide an opportunity for councillors to share their draft regeneration plans while seeking views, feedback and ideas from the community.

It is hoped that, with public support, a charitable organisation can then be formed with membership drawn from key stakeholder groups, community representatives and town centre businesses. The councillors are aiming for a formal launch in the summer.

In a joint statement they said: ‘We promised to follow up on several key actions raised at our initial meeting with town centre businesses over Easter. It was clear that more complex issues such as traffic management and business rates needed further exploration and some expert advice from the Council, so we have set up what we hope will be a really useful and informative workshop. It's a chance to exchange some ideas and find out what’s possible, and what is not.

‘At the same time, we are keen to get a structure in place to take some of our plans forward, so we are inviting the community to join us for a meeting next month. We recognise the challenge we are facing in our town centre and we are committed to making a positive change, so we’re calling on anyone who is willing to roll up their sleeves and work with us to come along and help us get started. We’re grateful to everyone who has engaged with us so far, and the words of support we have received.’

Community groups and members of the public are warmly invited to attend a town centre regeneration meeting on Monday 10 June at 7.30pm in the Mackays Hotel.

Town centre businesses are invited to attend a focused workshop exploring business rates and traffic management. Invitations have been emailed out to previous meeting attendees but further invitations will also be delivered to those who did not make the first meeting.