Coronavirus And The Upcoming Rise In The National Living Wage 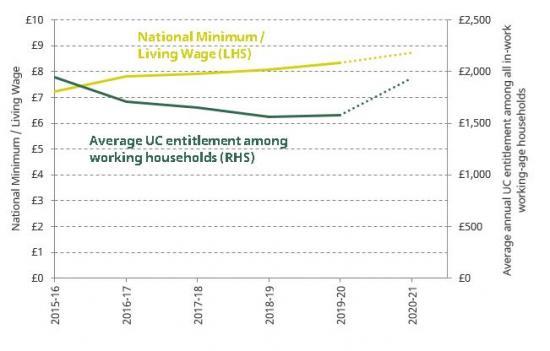 Over the past decade employment has grown very strongly, from 29 million to 33 million in work (70% and 76% of the working age population). At the same time wages have grown at historically slow rates. The government response has been to cut working age benefits and to increase minimum wages. There are problems with such a policy, but it makes some sense in the context of a low wage, high employment labour market. The big worry right now of course is keeping people in employment as demand for labour dries up. In that context the substantial increases in benefits - for example in Universal Credit and in Housing Benefit - announced last week are clearly an appropriate response as the government tries to protect people's incomes. Whether the planned increase in the National Living Wage to £8.72 an hour as from the start of April still makes sense is open to question. That decision was based on a recommendation made back in October when the labour market looked utterly different. If the absolute focus is on keeping people in paid work and attached to their employers, delaying next month's rise in the NLW could be a sensible move.

Last week the Chancellor announced a substantial package of temporary increases to benefits in the light of the Coronavirus outbreak, due to come into force in April. Such increases are well justified in the current climate. The National Living Wage (NLW) is also due to rise at the same time. Given the costs this will impose on employers this increase is now less desirable and there is a case for it being deferred.

The past five years have seen significant cuts to working-age benefits - following the Conservative 2015 manifesto pledge to cut £12 billion off the annual benefits bill – alongside increases in minimum wages, especially for those aged 25 or over. This is illustrated in the solid lines of Figure 1, which show the NLW and average entitlement to Universal Credit (UC) among in-work households (including those with higher incomes or assets who are not entitled to UC), both in real terms. While the NLW rose by 15% between 2015–16 and 2019–20 (from £7.24 per hour to £8.32 per hour), average UC entitlement among working households fell by 19%. At the same time the basic rate for a single out-of-work claimant fell by 8%, from £80.15 to £74.08 per week. The increases to minimum wages largely do not offset the cuts to benefits, with different households targeted by the policies and the overall size of welfare cuts much bigger than the increase in net earnings afforded by the NLW. However, the minimum wage rises took place when employment was high and rising, which is certainly the ideal time to implement such large increases.

Notes: For 2015–16 the average National Minimum Wage across the year is shown; in subsequent years, the National Living Wage is shown. Average UC entitlement among working households is calculated for all working-age households (defined as any household with an adult aged 65 or under), including for those entitled to no UC. For households claiming ‘legacy' benefits, we calculate what their UC entitlement would be if they claimed that instead. The Family Resources Survey (FRS) 2017–18 is used, with financial variables uprated to the year in question. Thus, the differences across years are driven by reforms to the UC system over time.

Since the outbreak of Coronavirus, the government has announced several temporary increases to benefits (substantially increasing the basic allowances of UC and Working Tax Credit, covering more rent for private renters in UC and Housing Benefit, and suspending the ‘minimum income floor’ which can substantially reduce UC entitlements for the low income self-employed). These giveaways are enough to bring real average UC entitlement among working households back to around its 2015–16 level (Figure 1). This period is a natural time to have a more extensive benefits system as government tries to shield families from deprivation resulting from Coronavirus-related job losses and inability to work. In addition one of the main objections to higher benefits – that they discourage work – is not an issue of immediate concern at the moment, with few employers hiring and many workers being instructed to self-isolate or needing to look after young children.

However, at the same time as these benefit reforms coming into place, the NLW will also increase – by 5% in real terms. It is much harder to see the case for raising minimum wages during the current crisis. The government has announced several policies with the explicit aim of avoiding massive job losses and business failure. Increasing employer costs via a rise in minimum wages has the potential to undercut these aims. Put another way: the Low Pay Commission recommended the upcoming NLW rate of £8.72 back in October. It is extremely hard to believe that, had they known that the Coronavirus outbreak were about to unfold, they would have recommended that same rate.

Given these circumstances, the government might do well to postpone the upcoming rise until the crisis has ended. They should ask the LPC for advice on whether there might even be a case for a temporary cut in minimum wages – mirroring the temporary increase in benefits. Clearly, minimum wage workers who are able to keep working would lose out from such a change, though those in poorer households (those in receipt of UC) will in virtually all cases be more than compensated by the increase to benefits, and the forthcoming rise in the point at which employees start to pay National Insurance Contributions would also reduce the extent to which minimum wage workers see their take home pay fall between March and April.