The civil service after Brexit: lessons from the Article 50 period 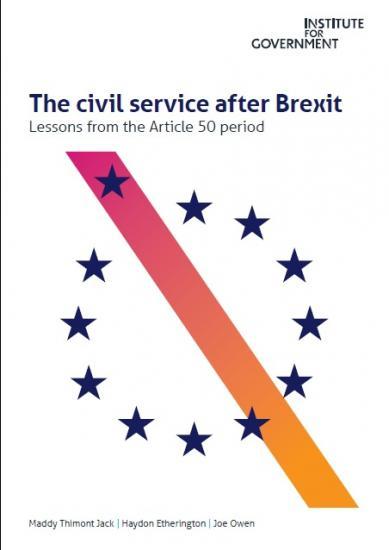 A paper from the Institute For Government

A divided cabinet and battles between parliament and the government revealed fundamental tensions in the civil service's role and its duty to "serve the government of the day".

This report says that both Theresa May and Boris Johnson failed to defend the civil service when MPs and commentators questioned its impartiality.

It says May allowed Olly Robbins, her chief Brexit negotiator, to become a target for political attacks over her controversial Brexit policy, while Johnson placed officials in an immensely difficult position by implying that he would break the law to take the UK out of the EU without a deal on 31 October 2019.

The task of delivering Brexit also exposed weaknesses in the civil service. Senior officials failed to confront ministers with the implications of not making key decisions, and both ministers and officials refused to be upfront about the severe political and economic consequences no deal could have in Northern Ireland.

The immense scale of the Brexit task also drove innovations that should help the government response to the coronavirus pandemic. No-deal preparations saw the introduction of faster decision making, the rapid relocation of large numbers of officials onto priority projects, and closer working relationships with the governments in Wales, Scotland and Northern Ireland.

However, the civil service could yet be forced to prepare for the possibility of a no-deal Brexit ahead of the 31 December 2020 deadline and the problems of the last four years will resurface unless lessons are learnt.

The paper recommends that:

The civil service should continue to support the mental health and morale of officials, particularly as the government manages both the coronavirus response and Brexit this year.

In almost four years, the civil service has done an extraordinary

amount of work. It has had to grapple with the most complex

political, policy and practical problems for decades. While there is

still a huge amount to do, the fact that the UK has handled the

work from the civil service.

The process has changed the civil service. It's bigger - it has grown by 18% since 2016.1 It is younger and more diverse. It covers new areas of policy - the UK is building its own trade policy. Its capability has grown - project management was once a neglected specialism in government. And it has got a better understanding of the

constitution – both how parliament works and the devolution settlements. In short, Brexit has invigorated the civil service.

The intense pressure of the past few years has driven innovation in how the civil service works. The recent talk about the need for civil service reform – making it more agile and outcome focused – ignores the reform that's been happening behind the scenes in delivering Brexit. Preparing for no deal, not once, but twice, meant adopting new ways of taking quick decisions, and facilitating the movement of people to build capacity in particular departments and operational centres.

But the civil service needs to also reflect on how its structures and culture facilitated the political paralysis and excessive secrecy that caused the problems over the past few years that we have highlighted in this report. By focusing on finding policy solutions to bridge cabinet divisions, rather than what was negotiable with the EU or deliverable on a tight timeframe, the UK was slow to understand the complexity of issues like the Irish border. This approach undermined the government's relationship with business, whose priorities were largely dismissed and who only received

The Brexit process up until now has exposed some of the limitations in the way the UK system functions: not least what the constitutional role of the civil service should be, and what tools it should have at its disposal when the government of the day is unable to properly fulfil its duties, or threatens to ignore the civil service code, constitutional conventions and the law. With significant political challenges coming down the tracks, not least in terms of the UK’s relationship with the EU and the future of the Union of the UK, these questions don’t go away just because the first stage of Brexit is over and majority government has returned.