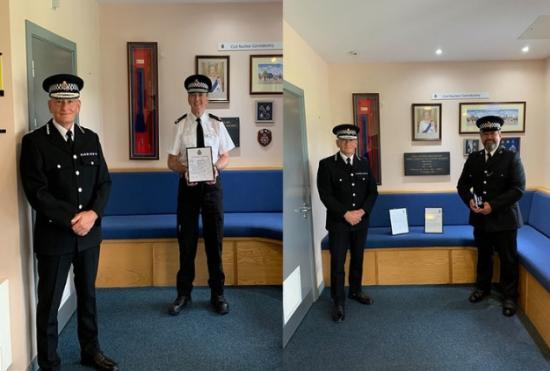 Two officers based at Dounreay received prestigious awards from Chief Constable Simon Chesterman this week in recognition of their long service and good conduct.

Andy joined the Civil Nuclear Constabulary, formerly the United Kingdom Atomic Energy Authority Constabulary (UKAEAC) at Sellafield in 1980 as a PC. During his time with the Constabulary, he served on the road escort team and marine escort team (now Strategic Escort Group), travelling on operations as far afield as Japan, and was part of the first rapid intervention team, before being promoted to Inspector and moving to Capenhurst in 2000.

While at Capenhurst, Andy took over as temporary force firearms officer for a year and was instrumental in getting us our first ever firearms license. He was promoted to Chief Inspector in Ops Support in 2008 and covered a wide portfolio area, including the drafting of our first ever STRA. In 2012 he was temporarily promoted to Superintendent for ops support and S Division for a year and took up his current posting as the OUC for Dounreay in July 2019.

During his time with the Constabulary, he has received commendations for his role in our first Op Temperer deployment and for his work creating the Operational Improvement Unit and improving deployability up to highs of 95 per cent.

PC Brian Watson joined on 5th July 1999 on Initial Recruits Course 158, earning the Endeavour Award. He was then posted to Dounreay and in 2001 he became a General Purpose (GP) Police Dog Handler partnered with Police Dog Jack, a white German Shephard.

Chief Constable Simon Chesterman said: "It was a privilege to reward these two long serving and dedicated police officers. During their time with the CNC and UKAEAC they have both specialised in their chosen fields and had long and satisfying careers as a result.

"It was good to be able to thank them personally for their service and I greatly enjoyed meeting Police Dog Dio. It shows that the CNC offers so many opportunities and rewards for those who want a varied and challenging role protecting critical national infrastructure."

Dounreay features in a new leaflet from the Nuclear Decommissioning Agency showing recent research, development and innovation.  See the leaflet link at the bottom of this page to read about some of the other investments by the NDA.
[Other Public Services]
19/1/2021

The Nuclear Decommissioning Authority has today published its fourth Draft Strategy and begun a 12-week public consultation.   The NDA regularly reviews its Strategy to ensure it has the right approach to decommissioning its 17 nuclear sites and benefits from the latest learning, best practice and can continue to deliver value for the taxpayer.