Reform of the International Debt Architecture is Urgently Needed 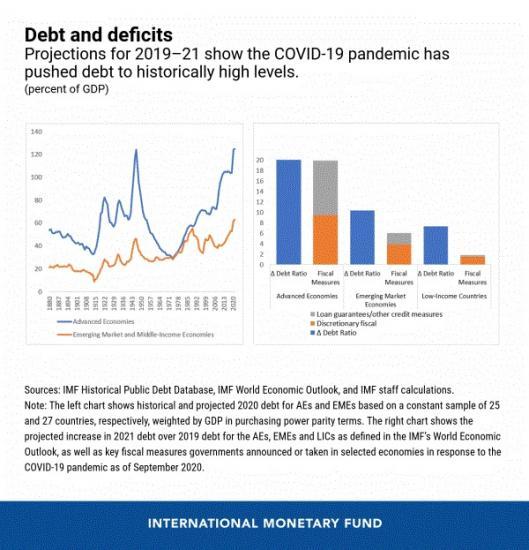 A new blog at the International Monetary Fund.

The COVID-19 pandemic has pushed debt levels to new heights. Compared to end-2019, average 2021 debt ratios are projected to rise by 20 percent of GDP in advanced economies, 10 percent of GDP in emerging market economies, and about 7 percent in low-income-countries. These increases come on top of debt levels that were already historically high. While many advanced economies still have the capacity to borrow, emerging markets and low-income countries face much tighter limits on their ability to carry additional debt.

Indeed, about half of low-income countries and several emerging market economies were already in or at high risk of a debt crisis, and the further rise in debt is alarming. Just as they are starting to recover from the pandemic, many of these countries could suffer a second wave of economic distress, triggered by defaults, capital flight, and fiscal austerity. Preventing such a crisis can make the difference between a lost decade and a rapid recovery that puts countries on a sustainable growth trajectory. As IMF research has recently shown, waiting to restructure debt until after a default occurs is associated with larger declines in GDP, investment, private sector credit and capital inflows than preemptive debt restructurings.

No debt crisis has happened yet thanks to decisive policy actions by central banks, fiscal authorities, official bilateral creditors, and international financial institutions in the early days of the pandemic. These actions, while essential, are fast becoming insufficient.

First, the initiatives taken so far are temporary by design. The G20 Debt Service Suspension Initiative, which was a highly welcome response to a call by the IMF and World Bank, expires at the end of this year. The IMF has also provided about US$31 billion in emergency financing to 76 countries, including 47 low-income countries, as well as debt-service relief to the poorest countries under the Catastrophe Containment and Relief Trust. With needs projected to remain high, developing countries will require additional low-cost financing in 2021 and beyond.

Second, most of the measures so far have focused on liquidity—maintain countries' access to finance, both from official and market sources. But as the crisis continues, solvency problems— the inability to repay debts—increasingly come to the forefront.

The Debt Service Suspension Initiative must be extended into 2021. If not, its current recipients will be forced to resort to austerity measures to be able to resume debt service, compounding the human suffering already caused by the crisis. The extension of the initiative should provide incentives to tackle unsustainable debt problems early. For example, the length of the extension could be linked to IMF and World Bank programs designed to reduce debt vulnerabilities.

Countries with debt vulnerabilities must tackle them urgently through a combination of debt management and measures to restore growth. Where debt is unsustainable, it should be restructured, the sooner the better. Private sector claims should be included, where applicable. Ignoring solvency problems only makes them worse.

Perhaps most importantly, there is a need to reform the international debt "architecture" comprising sovereign debt contracts, institutions such as the IMF and the Paris Club, and policy frameworks that support orderly debt restructuring. The goal is to provide speedy and sufficiently deep debt relief to countries that need it, benefitting not only these countries but the system as a whole.

[url=https://bit.ly/2HRF26h]Today, we published a new report evaluating the current architecture for restructuring privately held debt and suggesting possible improvements[/url]. The existing contractual framework has been largely effective in restructuring sovereign bonds but the recent cases of Ecuador and Argentina restructurings demonstrate issues that still need to be addressed, including the significant expansion in the diversity of commercial creditors and lack of debt transparency. For example, the framework has proven less effective for restructuring the increasing volume of non-bonded debt, as well as for collateralized debt and debt with collateral-like features. While the terms of such loans in many instances remain undisclosed, they appear to be particularly prevalent in low-income countries exporting natural resources.

Looking beyond privately held claims, most official debt is now held by creditor countries that are not members of the Paris Club, and do not follow Paris Club procedures. This makes it more difficult than in an earlier era to restructure debt owed to official bilateral creditors, and to ensure high participation by both official and private creditors.

Which aspects of the current debt architecture require fixing?

First, debtors and creditors should continue to strengthen contractual provisions to help minimize economic disruptions when debtors run into trouble. The IMF and others have successfully promoted the adoption of enhanced Collective Action Clauses in international bonds. But more remains to be done. Similar provisions are needed to facilitate orderly restructuring of non-bonded debt. Clauses that lower debt payments or automatically suspend debt service, such as in the event of natural catastrophes and other large economic shocks, can also be helpful.

Second, debt transparency should be increased. Without knowing what countries already owe and on what terms, creditors cannot make informed lending decisions. They will also be reluctant to participate in restructurings unless they know the terms given to other creditors.

Third, official bilateral creditors should agree on a common approach to restructuring official bilateral debts. It should be acceptable both to Paris Club members and others. Restructurings could include a common term sheet that requires the debtor to transparently lay out its debts and seek restructuring agreements from all its creditors—both official and private—on comparable terms. Such an approach would seek to ensure information sharing and fair burden sharing across all creditors. By doing so, it would likely raise participation and avoid costly delays.

Not all these reforms would have an immediate impact. While it will take time for contractual improvements to affect the debt stock, a common restructuring approach encompassing all official bilateral creditors—currently being discussed by the G20—could make a critical difference almost immediately.

The role of the IMF

The IMF is working hard to prevent a debt crisis, supporting its members with policy advice, financing, and capacity development. We will continue to provide debt service relief to the poorest countries under the Catastrophe Containment and Relief Trust. We are also fostering debt transparency, including through a stronger debt limits policy, providing technical assistance on debt management, and are working with the G20 to extend the DSSI. We support debtor-creditor coordination and debt restructuring through analysis of actions to restore debt sustainability, and by conditioning our financial support on high creditor participation.

All stakeholders need to do their part

The world is at a critical juncture and should not sit idle waiting for a crisis. It needs to review its arsenal of weapons—a task we have been conducting at the IMF. It also needs to do the utmost to prevent, and if necessary, preempt, another sovereign debt quagmire. The alternative could be large-scale defaults that would severely damage economies and set back their recoveries for years. Low-income countries are especially at risk, and their people are likely to suffer most if a debt crisis occurs.

The key steps are extending the Debt Service Suspension Initiative, addressing countries' debt vulnerabilities, and building a more robust debt architecture. We call on all stakeholders to do their part to reduce the risk of a catastrophe and pave the way for a safer financial system.