What Does The Latest Labour Market Data Tell Us? 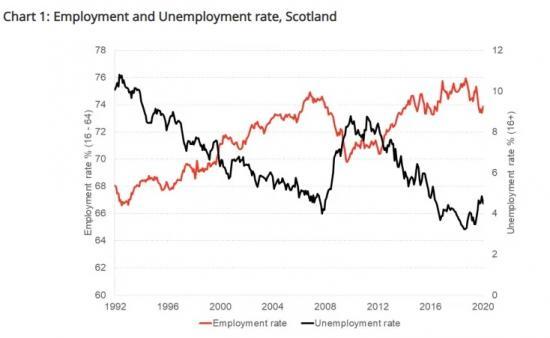 From Fraser of Allender Institute.

New labour market data were released by ONS on 13 October 2020. These covered the period to the end of August. In this short article we review the key insights from these data.

With the unemployment rate still sitting at a relatively low 4.5% (unchanged over the latest 3 months), and the employment rate sitting at 73.9% (up 0.4%-points on the three months before), some might wonder why we've not seen more movement in these data. Chart 1.

In essence, the main reason is that the various employment support schemes have softened the initial impact of CoVid19 on the Scottish labour market.

There is little doubt that these headline are masking the true scale of the challenge, and that the outlook is incredibly difficult.

Some new experimental data from HMRC tracks the number of workers registered for PAYE across the regions and nations of the UK. Again, the furlough support scheme will be helping here, but it is interesting to see the drop in payroll numbers across the UK despite the furlough scheme being in place.

New data, the first of these data for Scotland that cover the pandemic period, show that hours worked has fallen sharply, down 6.7 million hours in Scotland compared to a year ago. Chart 3.

This is a better measure of what's happened to firms' demand for labour at the moment than the headline employment rate.

To put these data into some context, this is the lowest weekly hours worked since 2013, at a time when the number of people in employment was 179,000 fewer than the headline data tell us it is now.

At the same time, the number of people in Scotland claiming unemployment related benefits is up over 100%, or by 113,000 people, compared to last year.

The usual caveat applies to Chart 4: enhancements to Universal Credit that were brought in as part of the economic response to COVID-19 mean that more people are eligible for unemployment-related benefits despite still being in work i.e. not all changes in Claimant Count are due to people not in work.

For some indicators we do not have data for Scotland, but the picture for the UK gives little cause for optimism.

We're seeing redundancies across the UK rising sharply, up 49% over the past three months.

At the same time vacancies are still down over 40% on a year ago. Chart 6. And are close to the lowest level recorded during the financial crisis.

We are seeing and hearing, and evidenced most recently in the Scottish Chambers Business Survey produced in partnership with the FAI, that many businesses - perhaps most saliently at the moment in hospitality and tourism - are struggling to continue trading given the stop-start nature of our progress on the public health front.

At such times, it is understandable the sense of frustration and anxiousness that exists across the business community in Scotland (and the UK). It would be wrong to hear the pleas for help as being from ‘profit hungry big business'. Most businesses in Scotland are small scale, often family run, businesses. They are frightened employers that can see at first hand the economic hardship that this crisis has ushered in.

We've spoken a lot about the costs and risks to public health from COVID-19. But business closures, unemployment, financial insecurity and poverty and homelessness bring devasting consequences too for health and wellbeing.

While unprecedented government support - including bounce-back loans and the furlough scheme - has helped many businesses to hang on over the summer, as this support tapers off many businesses are facing the hardest of decisions.

In time, headline labour market measures will catch up and let us document the scale of the impact from CoVid19, but be in no doubt about the grim scale of the challenge currently facing many businesses and their employees.

Read the article on Fraser of Allender with more charts etc