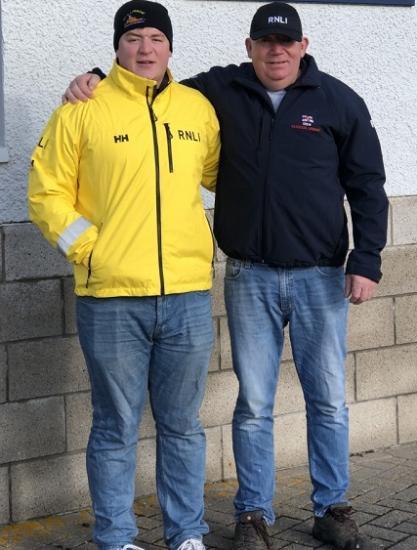 The Lifeboat station at Kessock extended congratulations to one of their RNLI family last month as Johnny Grant joined Wick Lifeboat as Mechanic Coxswain, following in the proud footsteps of his father, grandfather and late great-grandfather before him.

Johnny's father is Kessock Helm Doug Grant who has served in the RNLI for 35 years. He started his volunteer career in 1985 in Selsey before moving north to the Black Isle and transferring to Kessock Lifeboat Station where he has served continuously since. Johnny is also the grandson of Mike Grant, one of the most decorated lifesavers in the Institution's 196 year history.

Johnny said, "The RNLI has been in my family since before I was born, and I’ve got so many great memories of being around the station and the crew at Kessock, and of Dad rushing off to rescues from so many family events. It’s been a massive part of my life and I really wanted to give something back to the RNLI and the community which has looked after my family for years. It’s also a good feeling knowing I am making my own family proud."

"The team at Wick have been amazing with their welcome and passing on their experience to help me settle into my new role. I really look forward to many years being part of their crew and feel pretty honoured to be following in the boots of my Dad, Granddad and Great -Granddad."

Chief Executive of the RNLI, Mark Dowie said, “Lifeboat communities are special. In cities, ports, towns and villages around the coasts of the United Kingdom and Ireland, generations of crew, shore crew, officials, fundraisers and supporters, and their families, have combined as One Crew over nearly two centuries to save lives at sea.”

“But it is pretty special to see a fourth generation family member answering the pager and going to sea to save others. Congratulations to Johnny on taking up his new post at Wick Lifeboat Station and thank you to the entire Grant family for your selfless commitment over four generations.”

Kessock Helm Doug had followed his own father and grandfather onto the boat at Selsey, where he had grown up watching Coxswains Mike and Jack Grant serving the RNLI on hundreds of rescues. Doug’s father received not one but two coveted Silver Medals for Gallantry: the first in 1979 for his part in the rescue of the entire crew of 20 from the cargo vessel 'Cape Coast', and the second in 1984 for the rescue of a crew of six from the yacht 'Enchantress'.

Mike was part of the crew which was bestowed with the further honour of the Freedom of the City of London in 1985, an honour which he holds to this day.

Doug’s grandfather, Jack Grant, was awarded a Silver Medal in 1956 for the rescue of 18 people from the yachts 'Maaslust', 'Coima' and 'Bloodhound'.

Doug says, “I’m delighted that my son Johnny has continued the family RNLI tradition and most importantly that he’s doing so well in his new role and enjoying it so much. The RNLI family has always been so supportive of me and mine and it makes me very proud that Johnny now has his own career to follow in service. The skills and experience are passed down from the older generations and when that’s within your own family it’s a very proud feeling.”

Doug grew up with the sound of the twin maroons which would sound across Selsey to alert the crew to assemble for a rescue. He remembers being at school and waiting impatiently for the day to end so he could race down on his bike to the station to see what was happening.

“I joined the crew at 17 years old and spent years learning from my own father Mike and the other Coxswains and crew. I’ll never forget the first time I was taken on a dramatic shout in wild weather, and admit it was quite daunting for a young lad. The sense of confidence I felt by having my own father on the boat helped me to stand tall and do what I had been trained to do. We were 26 miles out at sea for 7 hours with force 7 gales in the pitch black. We successfully rescued the crew and the vessel and after that day there was no shout deemed too big for me to hold my own on.”

The RNLI equipment, boats and procedures may have changed over the years since the first Grant member joined in 1917, but its values of selflessness, courage, dependability and trustworthiness have never been more needed than in 2020. Since it was founded in 1984 the lifeboat crews around the UK and Ireland have saved over 142,700 lives.