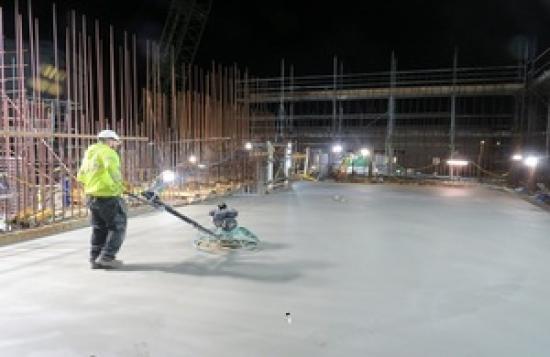 Work on Dounreay's newest radioactive waste store went up a storey last week, with the completion of a ‘mega' concrete pour.

The construction project was one of the first to re-start work on 22 June, following the easing of lock down restrictions. The 60-strong team has had to learn COVID-19 compliant ways of working, sometimes in close proximity with each other, to keep themselves and their colleagues safe on site. Since then they have poured 1,500 tonnes of concrete and the building walls have now risen to above the first floor level.

Last week the team embarked on the biggest concrete pour of the project so far, working for 9 hours to lay the floor slab in the crane maintenance bay (CMB) on the first floor of the building, with 27 lorries delivering 425 tonnes of concrete. An overnight shift completed the job in the early hours of the morning.

Dounreay Project Manager Dave Busby said that casting the CMB floor slab was a significant construction milestone as it will allow the team to install the 170 tonne CMB shield door early next year.

The team has overcome considerable obstacles this year, being COVID-19 compliant as they continue to work through the pandemic.

Dounreay awarded the contract to construct the new intermediate level waste store to GRAHAM Construction Ltd. Work started in 2018 and is expected to take around 3 years to complete. It will hold drums of waste in safe long term storage in accordance with Scottish Government policy.

Dounreay is Scotland’s largest nuclear decommissioning project and is widely recognised as one of Europe’s most complex nuclear closure programmes. The work is being delivered by DSRL, a company owned by Cavendish Dounreay Partnership, on behalf of the Nuclear Decommissioning Authority.

Dounreay Site Restoration Limited (DSRL) has announced the appointment of Mark Rouse as its Managing Director.   Mark took up the position of Managing Director in March 2020 but will now move from the current parent body organisation to Dounreay Site Restoration Limited to continue leading the business when it becomes an NDA subsidiary on 1 April 2021.