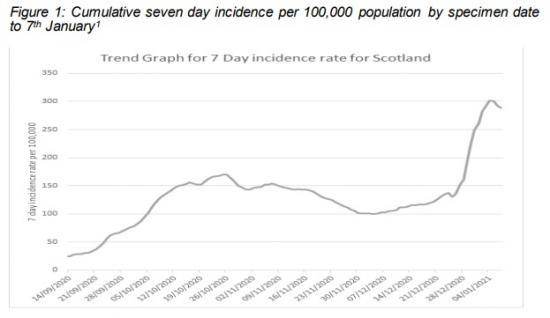 Over the last two weeks there has been a step change in the course of the epidemic with a sharp rise in case numbers and hospital and ICU admissions. A new variant of SARS- CoV-2 called B.1.1.7 or VOC-202012/01 which can be transmitted more easily than other variants is now circulating widely in Scotland.

The latest evidence from Imperial College, published on 31st December presents a consensus that this new variant has a substantial transmission advantage, with an increased rate of transmission estimated to be somewhere between 0.4 and 0.7. The percentage of cases composed of this new variant (cases tested via the UK Government laboratories which had a profile consistent with the new variant of Covid-19) is increasing rapidly in Scotland, from 49.7% on the 4th Jan to 62% by the 11th January. It is very likely that this strain will continue to increase in dominance in Scotland in a similar way to that already seen in London and SE England.

The R value in Scotland as of last week is now considered to be slightly above one (range 0.9 to 1.3) and the growth rate is -2% to 5%, which means the epidemic is likely in another growth phase. The total estimated number of infections in Scotland last week was around 6,450 per day (range 2,600 to 10,300), which was almost a 50% increase over a two week period, of these there was an average of around 2,050 confirmed new cases per day in the last week, which is an 11% decrease from the average case numbers reported last week.

The weekly percentage of positive tests is

10.1% a decrease from 11.9% this time last week but above the level a fortnight ago which was 7.2%. Seven day test positivity rates were relatively stable at around 5% for the month of December until the 25th.

As of 12th January (using specimen date 2 to 9 Jan) there has been a decline in the incidence of weekly cases per 100,000 since last week, however case rates for most areas remain markedly higher compared to levels reported before Christmas.

Inverclyde has the highest case rate, with 438 new cases being reported per 100,000. Dumfries and Galloway, North Lanarkshire and Renfrewshire have also all reported at least 400 cases per 100,000 over the last week. The only Local Authority areas

reporting under 100 cases per 100,000 in the last week are Argyll and Bute and the Northern and Western Isles.

The UK as a whole has experienced substantial increases in case numbers over the past month. Using cumulative seven day incidence per 100,000, Scotland's case rate has consistently remained lower than the rest of the UK despite recent increases. Over the month of December the number of cases per 100,000 doubled from around 100 to over 200 cases per 100,000 and now sits at almost 300 cases per 100,000. Last week we appeared to be tracking London with a four week delay, however we have since

Over December the case rate per 100,000 in London increased to more than 5 fold the rate at the start of the month and in the South East the case rate almost quadrupled. The emergence of the Variant strain (VOC202012/01 also called B.1.1.7) as a dominant strain type with increased transmissibility is thought to largely explain the increased rates of infection in London and South East England. The increase has been despite public health measures introduced to try and curb this spread in England.

Given the rise of the new virus variant, further analysis is ongoing to forecast the future impact on the number of infections and the NHS in conjunction with other modelling teams across the UK. Given the current pattern of case numbers we expect to see rising levels of infection impacting on hospital and ICU, which could lead to the

potential of the NHS being overwhelmed in some areas, even under a "stay at home" scenario.

The first vaccines were administered on Tuesday 8th of December and by the 12th January 175,942 people had received their first dose. It is anticipated that vaccination will reduce infection levels in the most vulnerable in the coming weeks and months and will make a significant difference to the NHS capacity required.