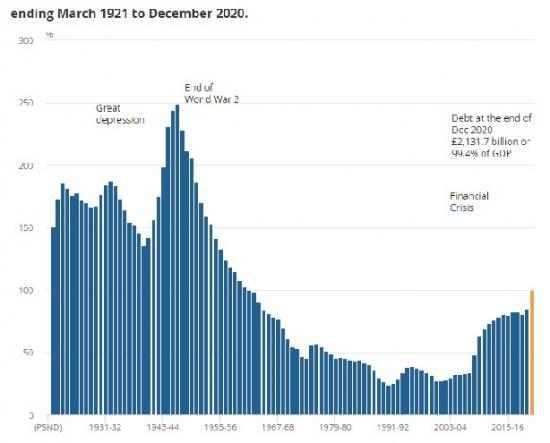 Central government tax receipts are estimated to have been £43.6 billion in December 2020 (on a national accounts basis), £1.4 billion less than in December 2019, with notable falls in taxes on production such as Value Added Tax (VAT) and Business Rates.

The impact of the coronavirus on the public finances

The coronavirus (COVID-19) pandemic has had a substantial impact on the economy and subsequently on public sector borrowing and debt.

Central government tax and national insurance receipts (combined) in the nine months-to-December 2020 fell by £39.6 billion (or 7.8%) compared with the same period in 2019, while government support for individuals and businesses during the pandemic contributed to an increase of £169.3 billion (or 30.7%) in central government day-to-day (or current) spending.

The latest official forecasts, published by the Office for Budget Responsibility (OBR) on 25 November 2020, indicate that the £270.8 billion borrowed by the public sector in the financial year-to-December 2020 could reach £393.5 billion by the end of March 2021.

In total, at least 50 schemes have been announced by the UK government and the devolved administrations to support individuals and businesses during the pandemic. In this section we list the largest of the active schemes by implementation status within the public sector finances.

Eat Out to Help Out

miscellaneous subsidies paid out to businesses

The following schemes are partially or not yet implemented in the public sector finance statistics:

Finally, some schemes have been announced but relate to future periods. This category includes cases where the scheme may be open for applications, but no payments have yet been made. Schemes that have been postponed and remain inactive are also included in this category:

In December 2020, the public sector spent more money than it received in taxes and other income, requiring it to borrow £34.1 billion, £28.2 billion more than it borrowed in December 2019.

The extra funding required to support government coronavirus support schemes combined with reduced cash receipts and a fall in gross domestic product (GDP) have all helped push public sector net debt as a ratio of GDP to levels last seen in the early 1960s. Public sector net debt (excluding public sector banks) at the end of December 2020 was equivalent to 99.4% of GDP.

Central government bodies spent £91.7 billion in December 2020, £28.1 billion more than in December 2019. Of this, £86.2 billion was spent on day-to-day activities (often referred to as current expenditure), such as:

providing services and grants (for example, related to education, defence, and health and social care) - including the current job furlough schemes

payment of the interest on the government's outstanding debt

The remaining £5.5 billion was spent on capital investment such as infrastructure.

In December 2020, central government paid £11.9 billion more in subsidies to businesses and households than in December 2019. These additional payments included the cost of the job furlough schemes; £4.7 billion as a part of the Coronavirus Job Retention Scheme (CJRS) and £5.3 billion Self Employment Income Support Scheme (SEISS).

Both local government and public corporations' data for December 2020 are initial estimates, largely based on the Office for Budget Responsibility's (OBR's) Economic and fiscal outlook (November 2020),which will be revised when further information is available.

Current and capital transfers between these sub-sectors and central government are based on administrative data supplied by HM Treasury and have no impact at the public sector level.

Borrowing in the current financial year-to-date

In the current financial year to December 2020, the public sector borrowed £270.8 billion, £212.7 billion more than in the same period last year.

This substantial increase largely reflects the impact of the pandemic on the public finances, with the furlough schemes alone adding £67.6 billion to borrowing in the financial year-to-December 2020.

The above information is extracts from the report published today by The Office for National Statistics. To read the full report with many links, graphs and tables go HERE