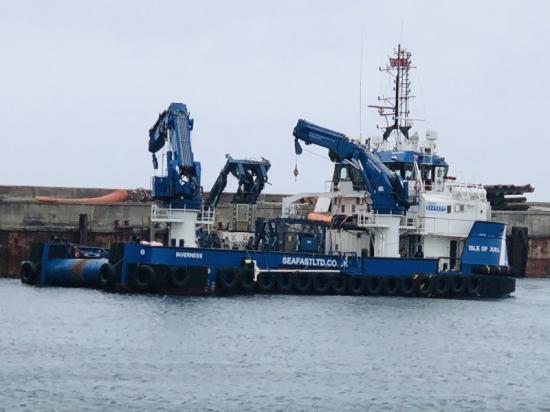 £10 million 'Isle of Jura' temporarily based at Gills Harbour in Far North of Scotland for her crew's debut tasks in the tidal-stream electricity field at the MeyGen sub-sea site, one mile off the little Caithness's port entrance channel.

One of the UK's most modern marine renewables service vessels made her debut calls at community-owned Gills Harbour, near John O'Groats, over the 2021 Spring Equinoctial weekend.

The Isle of Jura was sailed on an eight-hour trip from her regular home-port of Invergordon on the Cromarty Firth to Gills, Scotland most Northerly mainland port, on the shores of the Pentland Firth's Inner Sound.

The near-new 109' (33.18 metres) vessel that was launched in October 2019 from the award-winning Damen Shipyards in The Netherlands, had just successfully completed a contract on an offshore wind-farm in the waters of the Moray Firth, off the East Caithness coast.

From Gills, on Scotland's North coast, the sturdy, modern vessel was sailed to SIMEC Atlantis Energy (SAE) internationally-acclaimed MeyGen site in 30 metre deep fast-flowing tidal currents that sweep as streams round the South-West boundary of the uninhabited mid-Firth Isle of Stroma.

The Pentland Firth, the narrow sea-channel between the Scottish mainland and the Orkney Islands, contains some of the fastest sea-currents around the coasts of Europe. MeyGen is a key demonstrator location for seabed-mounted 'horizontal hydro power'. This technology was only developed in the 21st Century's second decade, largely by scientists and engineers in companies now under the SAE banner.

Isle of Jura is officially described as a DP2 Offshore Renewables Service Vessel and she is only the second ship of her class to be delivered.

Those engines typically drive her through the water at a top speed of 10 knots (11 m.p.h.) and when in towing mode, an impressive 43 tons 'bollard tonne pull' is achieved.

The vessel is an upgrade of the 24/26 metre 'multicat-class'' workboats for which Damen is world-famous and experienced professionals stationed on board let Isle of Jura provide a vast range of marine renewables services.

The vessel that has two powerful deck-cranes is considerabky bigger than workboats normally used from a Gills Harbour base for MeyGen activities. She thus tied up at the 200 metre long finger pier that is normally used by Britain's most modern ferry, the 85 metre Alfred, normally the busiest and shortest Caithness to Orkney link.

The Isle of Jura has a small aluminium boat on board and it was launched to facilitate landing and departure at the slipway at community-owned Gills Harbour's landward end, close to the harbour spur-access road off the A 836 highway.

The Inverness-registered 'super-workboat' has heated and air-conditioned living spaces for 15 persons at a time, with a galley and mess accommodation akin to what is regularly seen on luxury yachts of this size.

Small knots of local persons gathered at Gills to get a view of the rectangular vessel on her debut call there.

She belongs to Seafast Maritime Ltd, whose operational offices at in Invergordon, Easter Ross.

This is a sister company of longer-established Caldive Ltd. Its directors marine entrepreneurs Mr John Beaton and Ms Sandra Wilkie are the couple who played a major role in saving Fort William's famous Underwater Training Centre and getting it back in business after economic difficulties hit earlier, separate, operators.