The latest quarterly report by the Bank of England shows UK Credit Unions continue to increase in strength.

Adult membership of credit unions increased in 2020 Q4 after decreasing in 2020 Q3. The total number of adult members was 1.92 million.

Total assets across the UK increased by 1.6% over 2020 Q4 and reached its highest reported value at £3.98 billion.

Addressing credit union professionals at the ABCUL Conference last month, John Glen MP, Economic Secretary to the Treasury, highlighted the positive impact the sector have in communities across the country.   The Minister thanked credit unions in his speech for "delivering services that your members, communities, and the country need...
[Banks & Finance]
24/2/2022 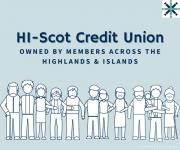 As the world begins to hesitantly open up, it's no surprise that the past two years have taught us the value of shopping local.  But have you ever thought about banking local? "A credit union is rooted in the community, especially as it is owned by its members and not external shareholders," said David Mackay, General Manager of HI-Scot Credit Union.
[Banks & Finance]
29/9/2021

The Banking Protocol is a rapid response scheme that will enable credit union staff to alert police when they suspect a customer is being scammed.   Police will attend the branch within the timeframe of an emergency response, enabling them to provide an effective customer intervention, secure evidence to enable them to investigate the potential scam and sometimes catch fraudsters in the act.
[Banks & Finance]
20/6/2021

The history of credit unions in USA has been one of growth over many years.   The public in many states seem to have moved in greater numbers and saved even more with their local credit union.
[Banks & Finance]
23/5/2021 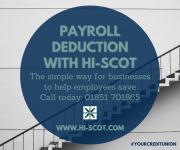 2020 has not been the easiest of years and, for many people, saving has been the last thing on their minds - but there's never been a more prudent time to think about putting money aside for a rainy day.  Or a global pandemic.