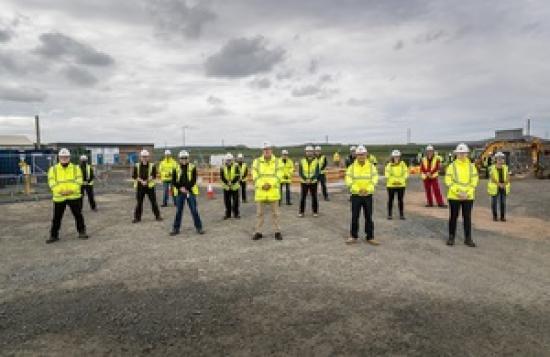 The shaft and silo project ‘advanced transition' work is getting underway at Dounreay.

Radioactive waste was historically consigned to the 65 metre deep shaft and the silo, an underground waste storage vault, over several decades starting in the late 1950s. Now the higher activity waste must be retrieved and repackaged, suitable for long-term storage in a safe modern facility.

Retrieving the waste from the shaft is one of the most complex decommissioning jobs that the site must complete, and innovative concept designs evaluating the techniques and equipment to be used for removing and processing the waste have been developed over the last decade.

In 2007, in a world first for Dounreay, the shaft was encircled in a boot-shaped ring of grout to isolate the radioactive waste from the environment, preventing large volumes of groundwater flowing into the shaft during waste retrieval and becoming contaminated.

Last year DSRL awarded the £7.5 million contract for the advanced transition works at the shaft and silo to Nuvia and Graham Construction. The work includes the rerouting of existing services as well as construction and demolition works, preparing the waste facility to be emptied of higher activity waste.

Project manager Kirstin Polson said:Cleaning out the legacy waste from the shaft and silo is one of the most significant decommissioning projects at Dounreay.

We are now at the enabling phase of this major project to retrieve the waste using remote equipment in a specially designed facility, and to process it for long term safe storage.

Dounreay is Scotland's largest nuclear decommissioning project and is widely recognised as one of Europe’s most complex nuclear closure programmes. The work is being delivered by DSRL, a wholly owned subsidiary of the Nuclear Decommissioning Authority.

The first roof beams have been lifted into place at Dounreay's newest shielded radioactive waste store.   Seventy six beams, weighing a total of 1,400 tonnes, the equivalent of 116 double decker buses, are needed to complete the mammoth roof structure which will have a total weight of 3,300 tonnes.
[Other Public Services]
17/9/2021

Innovation in the face of adversity earned Scotland's largest nuclear site a shot at Scotland's top event award.   About 100 or so workers normally attend Dounreay's annual showcase event, when staff are recognised for reaching levels of excellence in their work to decommission the plant.
[Other Public Services]
5/8/2021

Dounreay Site Restoration Limited (DSRL) has awarded two contracts worth a combined GBP11.2 million (USD15.9 million) to USA-based engineering group Jacobs for decommissioning work at the Dounreay site in Scotland.  Under the contracts, Jacobs will upgrade the ventilation system at the Prototype Fast Reactor (PFR) and develop the decommissioning strategy for the fast reactor fuel reprocessing plant in the Fuel Cycle Area.
[Other Public Services]
4/6/2021