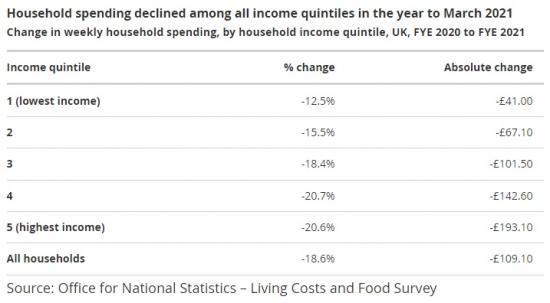 Restrictions on buying certain goods and services alongside drops in income during the pandemic led to a reduction in average household spending.

UK households reduced their spending during the coronavirus (COVID-19) pandemic by an average of £109.10 (or 19%) a week.

During the year to March 2021, households spent less on goods and services that were restricted at various times to control the spread of coronavirus. At the height of the spring 2020 lockdown, more than one-fifth of usual household spending was largely prevented.

Households may have been able to cut back on spending if they were able to shift to home working. Higher income households, who tended to spend more on travel pre-pandemic, and whose workers were more likely to be able to work from home, saw a larger drop in spending than low income households.

However, for some, the reduction in spending may have been associated with a fall in income. Around a third of workers saw their household income fall in the financial year ending (FYE) 2021, rising to 42% for the 20% on the lowest incomes (who were more likely to be furloughed and less likely to be able to work from home than people on higher incomes).

While both spending and income fell for many UK households, people are on average finding it easier to make ends meet, with the proportion of people reporting difficulty in making ends meet falling by six percentage points from 34% in the year to March 2020 to 28% in the year ending March 2021.

Those who had experienced a loss of income were more likely to also report financial pressures, such as difficulty making ends meet. How the pandemic has affected a person or household financially differed by employment status, age and ethnicity.

Higher income households saw the biggest reductions in spending during the pandemic
Restrictions brought into place to curb the spread of coronavirus, and the changes in behaviours many people adopted due to the pandemic, meant that households did not spend as much in the last year as they would usually.

The highest income households saw a larger drop in spending than the lowest.

Reduced spending on restaurants and hotels, recreation and culture and transport contributed most to the decline in overall spending for all income groups.

The highest income households, whose working members were more likely to work in jobs that could be carried out from home, saw spending on housing, fuel, and power rise during the pandemic, while the poorest households saw spending in this area fall.

Higher income households saw the largest spending drops on non-essentials such as restaurants.

Increased spending on food and non-alcoholic drinks had a larger impact on expenditure in the poorest households. Lower income households spent proportionally more in this area pre-pandemic, with spending in this area making up around 15% of total expenditure for poorest 20% of households, compared with 8% for the richest fifth in FYE 2020. In FYE 2021 this increased to 18% for the lowest income households, and to 12% for those on the highest incomes.

Falling demand for transport on the other hand contributed more to drops in spending among the richest fifth of households, with spending on international flights and personal vehicles both seeing large falls.

Spending on holidays abroad accounted for half of spending falls in the highest income households.

Workers on lower incomes were more likely to have seen their income fall
While many households saw their spending fall dramatically during the pandemic, substantial changes in the economy meant that many also saw their income fall.

Workers on lower incomes were more likely to report decreases in income in the year to March 2021 compared to the previous financial year, with 42% of those on the lowest income reporting a decrease, compared with 31% for those on the highest incomes.

This could be because of the types of jobs in different income groups. During the first national lockdown in spring 2020, workers on lower incomes were more likely to be furloughed and less likely to be able to work from home than those on higher incomes.

Jobs at greater risk during lockdowns, because they were not likely to be classed as key worker roles or able to be carried out from home, were also lower paid on average than jobs that were less vulnerable during the pandemic.

People on higher incomes were also more likely to be paid in full if they were unable to work, compared with those on lower incomes.

Working adults on the lowest incomes were most likely to see a fall in household income in the year to March 2021.

In all income groups, the proportion of households whose weekly spending exceeded weekly income fell in the last financial year compared with FYE 2020. However, among the poorest households, two-fifths (40%) still spent more than they had in disposable income (money available after income tax and national insurance contributions).

Data from the Opinions and Lifestyle Survey (OPN) suggest that those on higher incomes were able to recover faster from the financial shocks of the first national lockdown.

Between April and June 2020, the proportion of people in different income groups using their savings to cover living costs varied, but from Summer 2020, those with an annual income under £20,000 were one-and-a-half times as likely to be using their savings than those on higher incomes.

Throughout the pandemic, those paid less than £20,000 were also between two and three-and-a-half times more likely to be furloughed than those on higher salaries.

The self-employed were less able to make ends meet than before the pandemic, unlike the population as a whole.

This may reflect self-employed workers' higher likelihood of having significant savings to draw on. On average, more than three-quarters (76%) of self-employed households had enough financial assets to cover a 25% fall in their household employment income, and 61% could cover a 75% fall for three months.

Those of Black ethnicity were most likely to struggle paying bills
Previous analysis covering the period before the pandemic has highlighted significant inequality in income and wealth by ethnic group.

Between May 2020 and February 2021, those of Black ethnicity were the most likely to report falling behind with many bills (3%), and to find keeping up with bills a heavy burden (20%) - a higher proportion than in the whole population.

Older age groups were better insulated against the economic impacts of the pandemic
Younger people were more likely to report financial pressures than older age groups, with people aged under 35 years most likely to find keeping up with bills a heavy burden (9%).

Labour market statistics show that younger people were more likely to be furloughed during FYE 2021, and those aged 16 to 24 years were particularly affected, experiencing a greater decline in employment rate compared to those aged 25 years and over.

However, over the last quarter (April to June 2021) there was a stronger increase in the employment rate for young people - suggesting that the reopening of parts of the economy has allowed young people to either return from furlough or find new work.

Older age groups held more savings in the run up to the pandemic.

The median balance on individual current accounts, savings and ISAs was more than six times higher for people aged 65 years and over compared to that of those aged 25 to 34 years in the ten months to February 2021, suggesting older age groups were better insulated from some of the financial hits of lockdown.

Read the article at Office for National Statistics