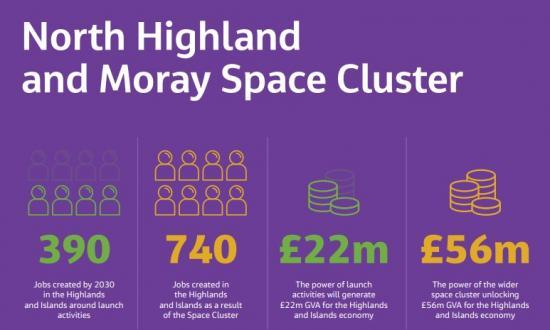 A new report launched (Wednesday 29th September 2021), commissioned by Caithness Chamber of Commerce on behalf of the Caithness & North Sutherland Regeneration Partnership, demonstrates the economic benefits that Space Hub Sutherland will bring to the North Highland and Moray areas.

Jacobs, the global professional services company, estimates that a Northern Space Cluster could create 740 jobs in the Highlands and Islands and boost the regional economy by £56 million per year by the end of this decade.

The report, The North Highland and Moray Space Cluster Strategy, funded by Dounreay Site Restoration Ltd (DSRL) and Highlands and Islands Enterprise (HIE), was produced for Caithness and North Sutherland Regeneration Partnership, which aims to attract a space business cluster to the North Highlands and Moray.

"As a commercial spaceport, Space Hub Sutherland will play a critical role in bringing income and employment to the North Highlands and Moray region," said Caithness and North Sutherland Regeneration Partnership chairman Ian Ross. "It will help to retain highly skilled individuals in the North Highlands and offer opportunities to young people to help stem the flow of depopulation. Space Hub Sutherland will unlock further development of the Moray space cluster and support UK and Scottish government objectives for growing the space sector."

Space Hub Sutherland, which is being developed by HIE, was the first vertical satellite launch site to secure planning permission in the UK and could become Europe's first continental orbital spaceport.

The Jacobs economic impact model estimates that by 2030, the development could support a further 520 jobs in the rest of Scotland, including at space rocket manufacturers Orbex in Forres, and 140 in other parts of the U.K.

HIE Director of Strategic Projects David Oxley said: "Jacobs is a world leader in this kind of analysis and their findings are a huge vote of confidence in Space Hub Sutherland. Our central aim in developing this project has always been to generate significant benefits for the local community and the wider regional and Scottish economies. This is a highly credible report that we believe endorses our vision for a Northern Space Cluster, building upon a commercial spaceport in Sutherland, and the positive impacts it will generate."

Trudy Morris, Chief Executive of Caithness Chamber of Commerce, said: "In addition to the clear economic benefits to the region, this report also demonstrates the capability, flexibility and willingness of the local supply chain to capture opportunities in an exciting new industry. With experience in a wide range of energy sectors, our highly-skilled local supply chain is ready and able to engage with the UK space sector as this exciting development proceeds."

Chris Larmour, Chief Executive Officer at Orbex said "Space Hub Sutherland is already a catalyst for new jobs and commercial opportunities in the North Highlands and Moray - and this will only intensify over the coming years. We are happy to play our part in this economic growth and to create new prospects for young people in the area."

The overall benefit of the North Highland and Moray Space Cluster to the UK economy would be an additional £99m in average annual gross value added, which is a measure of the value of goods and services produced, with £90 million of that generated in Scotland.

The spaceport itself will support more than 40 full-time jobs when fully operational with 12 launches per year. But Jacobs says more jobs will be created in construction and tourism, with the launches expected to attract an annual total of more than 4,400 visitors, whose spending will boost local hospitality businesses.

A healthy, wealthy and inclusive society starts with a happy employee, writes Rachel Hunter, HIE's director of service delivery There's no doubt that people do a better job when they're happy in their work.  They're more committed, more productive, and more innovative.
[Advisory / Counseling Services]
17/7/2022

TechHUB is part of the Northern Innovation Hub (NIH), a £14.2m initiative delivered by HIE under the Deal, which focuses on developing innovation in small and medium sized businesses in the Highland Council area.   The funding approval includes costs of refurbishing Fyrish House at Teaninich Industrial Estate in Alness, a building owned by HIE, where the TechHUB will be housed.
[Advisory / Counseling Services]
8/7/2022

Funding Available For Ambitious Young Businesses In The Highlands And Islands

All-Energy is back for its 21st anniversary and the first face-to-face event in two years.   In conjunction with Highlands and Islands Enterprise (HIE), the region's businesses will exhibit on the HI-energy pavilion, which once again will host the largest regional presence at the show.