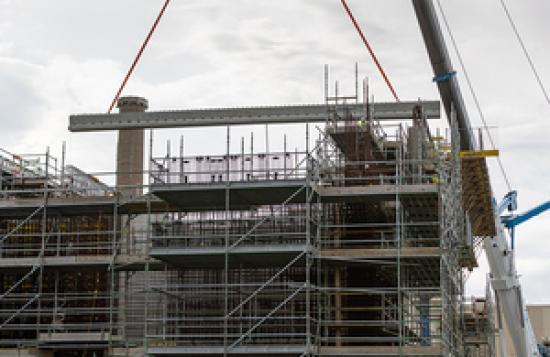 The first roof beams have been lifted into place at Dounreay's newest shielded radioactive waste store.

Seventy six beams, weighing a total of 1,400 tonnes, the equivalent of 116 double decker buses, are needed to complete the mammoth roof structure which will have a total weight of 3,300 tonnes. They were manufactured in Ireland and shipped to Scrabster in August.

In the first phase of the work, 31 beams weighing between 25 and 45 tonnes each were transported to site by 4 extendable trailer articulated lorries. They were then lifted into place using the existing on-site 250-tonne crane and a 500-tonne mobile crane.

Local company Hugh Simpson is contracted by GRAHAM Construction Ltd (GCL) to store, transport and install the beams. GCL is constructing the new waste store, which will hold drums of intermediate level waste in safe long-term storage in accordance with Scottish Government policy.

Dounreay's Programme Delivery Director, William Lindsay, said:It is a logistical challenge to get these roof beams into place, at height, in a congested site, and has required a significant amount of planning to achieve the first of a three-phase installation sequence.

Dounreay is Scotland's largest nuclear decommissioning project and is widely recognised as one of Europe's most complex nuclear closure programmes. The work is being delivered by DSRL on behalf of the Nuclear Decommissioning Authority.

Innovation in the face of adversity earned Scotland's largest nuclear site a shot at Scotland's top event award.   About 100 or so workers normally attend Dounreay's annual showcase event, when staff are recognised for reaching levels of excellence in their work to decommission the plant.
[Other Public Services]
5/8/2021

Dounreay Site Restoration Limited (DSRL) has awarded two contracts worth a combined GBP11.2 million (USD15.9 million) to USA-based engineering group Jacobs for decommissioning work at the Dounreay site in Scotland.  Under the contracts, Jacobs will upgrade the ventilation system at the Prototype Fast Reactor (PFR) and develop the decommissioning strategy for the fast reactor fuel reprocessing plant in the Fuel Cycle Area.
[Other Public Services]
25/6/2021