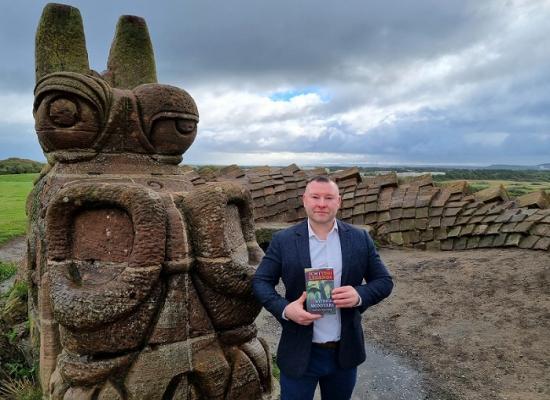 Dr Aaron Mullins, who hails from Wick, scored his third bestseller in a row with a book of Scottish monster legends, which soared into Amazon's top 100 bestsellers charts on its day of release.

The book was a top 10 bestseller in multiple folklore and mystery categories, sitting alongside books by Neil Gaiman and Stephen King.

In the book, Aaron has shared legendary tales from Caithness and beyond, as well as his own monster hunting attempts on Loch Ness.

Aaron has drawn on his experience as an award-winning psychologist to add an edge to his re-telling of famous Scottish monster tales and bring these mythical creatures to life.

Scottish Legends: 55 Mythical Monsters features stories from the Highland's rich folklore history. From bauchans and bodachs that terrorised Caithness farms and castles, to the boy from Thurso who had his finger bitten off when he tried to ride a kelpie.

Dr Mullins said: "Ancient Scots were curious about the world around them and their fantastical explanations of natural phenomena often involved the creation of mythical creatures with amazing powers. These Scottish monster myths can give insights into the local customs and folklore of their time, particularly in the Highlands and Islands, which were heavily influenced by Viking legends.

I have told the tales of giants, monsters and other astonishing creatures, particularly those that roamed the North Sea. I grew up swimming in the Trinkie and at Reiss Beach and was inspired by the sheer terror my younger self felt at unseen creatures brushing against my legs.

Like the tales told in my previous book Scottish Urban Legends: 50 Myths and True Stories, the real power of these Scottish stories lies in their ability to not only entertain us as monster tales in the present, but also to forge a living link to our past. New generations can enjoy these legends and feel connected to the land and its people.

His latest bestseller caps a successful couple of years for the author, who was one of the featured writers at the opening showcase of this year's Tidelines Book Festival, based at the Harbour Arts Centre in Irvine.

With three bestselling books, a competition-winning poem and a double-page interview in Ayrshire Magazine under his belt, Aaron has emerged as one of the Scotland's most popular up-and-coming authors.

Aaron says: "I think we need a bit of escapism from the upheaval of lockdowns these past couple years, so I want these tales to remind us of simpler times when the tides were the breath of a great sea dragon and thunder was the angry roar of a living god. Mythical beasts that still live on in our hearts and minds, with every re-telling of their legendary deeds.

Growing up in Wick, I was aware of local legends, like the selkie's grave in Castletown, from a very young age. As kids, we were surrounded by forests, mountains and the sea, which to our young imaginations contained all manner of beasts.

We travelled to Orkney on both school and family trips, immersing ourselves in the history and legends of its islands. One of my favourite memories is of another school trip, to Dunrobin Castle in Sutherland, where my younger self was in awe of the skulls, stuffed heads and life-size replicas of various animals that adorned the hunting trophies room.

These memories and my growing interest in the cultural history and folklore tales of Scotland inspired this book."

This is something he wanted to capture in his book which is available to buy on Amazon, where his many five star reviews display the growing popularity of this author from Caithness.

You can find his previous bestselling Scottish books on his website
www.aaronmullins.com

You can grab your own copy from Amazon:
https://www.amazon.co.uk/gp/product/B09HBYRR4J/