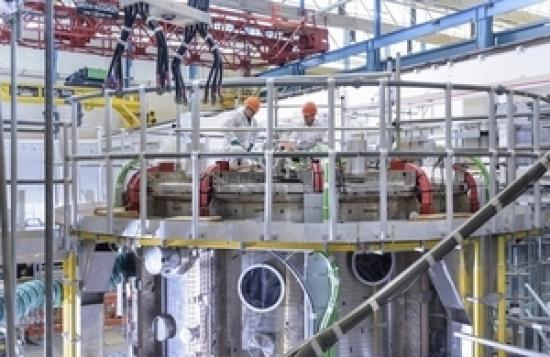 The investment will tackle key challenge in fusion power development.

The UK's new fusion experiment MAST Upgrade at Culham, Oxfordshire is to receive funding to tackle one of the hottest issues in fusion energy research - plasma exhaust.

The UK Atomic Energy Authority is assembling MAST Upgrade at Culham Science Centre and the device is within months of its first operations. The £21 million of plasma exhaust enhancements will be phased between now and 2022. Funding will come jointly from the European fusion research consortium EUROfusion and the UK's Engineering and Physical Sciences Research Council.

The controlled exhaust of power and particles from a hot fusion plasma, through the ‘divertor' area of the reactor, is arguably the biggest challenge facing a future fusion power plant using the tokamak design. The extreme power loadings (&gt10 megawatts per square metre - higher than that on a spacecraft re-entering Earth's atmosphere) in a conventional divertor would require regular replacement of reactor components and adversely affect the economics and cost of electricity. Divertor and exhaust physics is therefore a major part of EUROfusion’s reactor design work as part of its EU Roadmap to the Realisation of Fusion Energy.

MAST Upgrade’s flexible divertor design is already focussed on studying a range of configurations which could solve this problem. These include the new ‘Super X’ divertor, designed to cool particles down by steering them on a longer exhaust path out of the plasma.

These upgrades will allow fusion scientists to improve their understanding of plasma exhaust physics and enable better predictive modelling of this issue for the prototype fusion powerplant DEMO.

Head of MAST Upgrade Operations, Andrew Kirk, was responsible for putting together the funding bid, said:MAST Upgrade provides a uniquely flexible test bed for plasma exhaust physics in all divertor configurations. This extra funding will enhance our capabilities even further, enabling MAST Upgrade to assess alternative divertors for use in the first fusion power plants.

Martin Cox, MAST Upgrade project sponsor, also recognised a wider benefit:I am delighted that we have received such strong EUROfusion support for MAST Upgrade despite the perturbation caused by Brexit. This shows tremendous confidence in our facilities and people, and demonstrates that we have a very important role to play in the future European fusion programme.

Fusion energy Fusion research aims to copy the process which powers the Sun for a new large-scale source of clean energy here on Earth. When light atomic nuclei fuse together to form heavier ones, a large amount of energy is released. To do this, fuel is heated to extreme temperatures, ten times hotter than the centre of the Sun, forming a plasma in which fusion reactions take place. A commercial power station will use the energy produced by fusion reactions to generate electricity.

Fusion has huge potential as a long-term energy source that is environmentally responsible (with no carbon emissions) and inherently safe, with abundant and widespread fuel resources (the raw materials are found in seawater and the Earth’s crust).

Researchers at Culham are developing a type of fusion reactor known as a ‘tokamak’ - a magnetic chamber in which plasma is heated and controlled. The research is focused on preparing for the international tokamak experiment ITER, now being built in southern France. ITER - due to start up in 2025 – is designed to show that fusion can work at the scale of a powerplant, and if successful should lead to electricity from fusion being on the grid by 2050.

Fusion research at Culham is funded by the Engineering and Physical Sciences Research Council and by the European Union under the EURATOM treaty.

EUROfusion The EUROfusion consortium is made up of thirty members, representing 26 European Union member states plus Switzerland and Ukraine. In addition about 100 third parties contribute to the research activities through the consortium members. EUROfusion collaborates on ITER activities with Fusion for Energy (Spain) and intensively supports the ITER International Organization (France).

EUROfusion funds fusion research activities in accordance with its roadmap to the realisation of fusion energy. The roadmap outlines the most efficient way to realise fusion electricity by 2050.