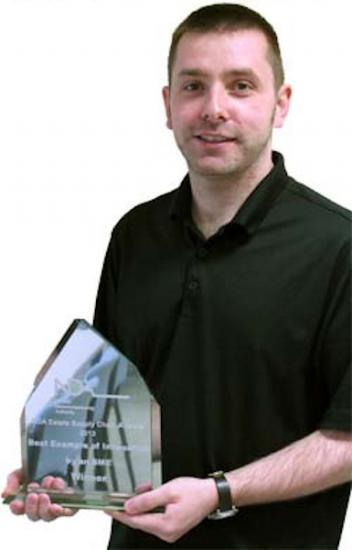 David Craigie, the product designer holding the award.
The award was presented for the design and manufacture of a High Temperature CCTV camera System for inspection of the Dounreay Fast Reactor Sphere (DFR). The project was scoped by the DFR fuels disposition team who are tasked with the removal of the remaining breeder fuel from the reactor vessel, leading ultimately to the dismantling of the DFR. The camera was required to provide a visual insight into the internal conditions of the reactor vessel, last seen, only partially, in the early sixties. The information produced by the camera has potentially saved millions of pounds and thousands of man-hours.
"Despite highly challenging conditions inside the DFR, the camera system was operated successfully and survived a THREE month campaign of testing, with the resulting footage proving essential to forming the strategy of fuel removal," comments Bill Baxter, Manufacturing Site Manager, Kongsberg Maritime Ltd. "Though the entire system was designed from the ground up, our experience in developing underwater cameras for the offshore oil & gas industry helped us to overcome the significant challenges of this project."

The detailed footage has mitigated many of the project risks associated with the challenge of removing the remaining breeder fuel material in the DFR whilst enabling modifications to be made to the standard existing tooling before entering into active decommissioning operations. It has also provided a firm figure for the quantity of fuel to be recovered and returned to the national stock storage facility at Sellafield. The project had the desired effect of de-risking the entire operation from the health and safety viewpoint and forms part of the critical path of decommissioning the Dounreay site.

Kongsberg Maritime designed the camera system to survive the harsh nitrogen inert atmosphere in the reactor at temperatures of up to 100 degrees centigrade and predicted radiation levels up to 20 sieverts/hr. The camera also had to look up towards the ceiling of the reactor cavity in order to work out the best way to clean up the entire vessel, meaning a separate moveable camera head had to be designed. The system was to be deployed through a 228mm diameter port at a distance of 5m through a gland sealing arrangement and the camera had to be capable of zooming this distance while providing useable, recordable video.

"We designed the system with a unique cooling arrangement and developed an additional interchangeable head with a 45 degree mirror attachment in order to get a view of the reactor ceiling, whilst ensuring the system could be cleaned for re-use in subsequent operations," explains Baxter. "It was originally thought that we could use Stainless Steel for the camera housing, but after thorough testing we chose a glass-filled nylon material for its thermal properties. An innovative Vortex cooler in conjunction with the nitrogen protected the critical parts of the system, enabling the camera to operate reliably inside the reactor, resulting in the highly valuable footage now being used to support the complex long-term DFR decommissioning project."

The Nuclear Decommissioning Authority recognised the role played by a Wick-based manufacturer at Dounreay in its national awards for the UK supply chain.   Kongsberg Maritime Ltd supplied a camera capable of working in the harsh radiation environment inside the Dounreay Fast Reactor.
[Engineering & Metal Goods]
15/11/2013

Oscar-winning film director James Cameron is rightly celebrating his successful voyage to the bottom of the sea this week...  but a Caithness engineering firm got there first.
[Engineering & Metal Goods]
7/6/2010

Camera Manufacturer Zooms in on Innovation

A specialist manufacturer based in Wick which produces cameras for use in some of the most dangerous and inaccessible places on Earth is focused on new opportunities after investing in cutting edge equipment.   Kongsberg Maritime Ltd (KML) has spent over Ł150,000, including Ł61,000 from Highlands and Islands Enterprise (HIE), to install a Diamond Turning Lathe and monitoring kit which will allow them to develop their own custom built lenses.