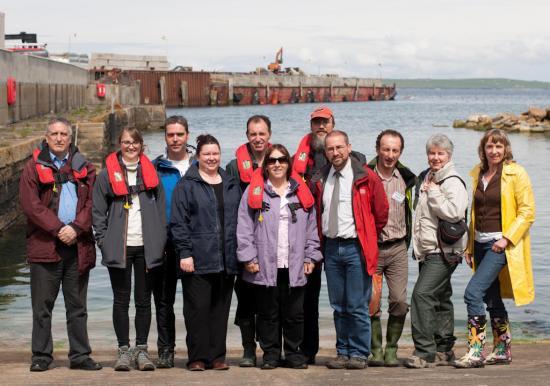 A top team of Scottish-based scientists, engineers and academics sailed out to the Pentland Firth's Inner Sound from Gills Bay on a fact-finding mission to see at first hand the fast-flowing waters above the seabed site of the UK's first planned 'marine electricity' power-station.

The three-mile round trip from community-owned Gills Harbour on board its director William Simpson's fishing-vessel/work-boat Boy James to the site of MeyGen Ltd's planned tidal stream electricity 'array' was a practical highlight at the end of a two-day conference held this week in Thurso, Caithness.

The above event, hosted by the University of the Highlands & Islands Environmental Research Institute, was aimed at researching new electronic 'measuring devices', called 'sensors', to help speed up and add to the safety of generating 'green' electricity from the massive 'wealth of power' contained within Scotland's tidal streams and near-coast waves.

Details of Meygen Ltd's pioneering 'demonstration array' of four turbines, expected to be deployed in 2015 and 2016 on its Inner Sound site ... between Scotland's North Coast and the Island of Stroma ... were given to the Boy James group by Ms Sarah Crammond, a computer sciences and mathematics graduate from both Bristol and London University's top-rated Imperial College. Sarah is the company's Project Analyst, largely responsible for the specific location of the first four 1.5 MW turbines to be installed on seabed leased from the Crown Estate there.

Also sailing out from Gills Harbour was Professor Ian Bryden, who has championed 'artificial extraction of energy from the sea' for decades. He was recently appointed Vice-Principal of the University of the Highlands and Islands to strengthen its research bias towards developing the North of Scotland's natural resources, and led the team wishing to see increased links between engineering companies and the academic fields in Scotland, to hopefully ensure that world-class projects ensue.

The Scots professor , who previously headed Edinburgh University's Institute for Energy Systems and earlier researched at Aberdeen's Robert Gordon and at Edinburgh's Heriot Watt Universities, has overseen how tidal power has evolved from an academic pursuit ... in which he played a prominent part ... towards the threshold of commercial viability, as with MeyGen Ltd's Inner Sound 'demonstration array', expected toi be installed during the next two years (2015/16).

Gills Harbour Ltd's chairman Mr Bill Mowat , himself a Fellow of the Energy Institute, and top local entrepreneur Mr Andrew Banks, OBE, MD of Pentland Ferries Ltd, which operates Scotland's most successful 'mainland to islands group' year-round ROPAX ferry service from the country's most northerly port WITH THE 2,400 tonne catamaran Pentalina, were on hand to discuss plans for improvements to its facilities to enhance its value to the nascent 'marine energy' industry in the Pentland Firth.

Skipper Simpson was available to answer any queries on the Inner Sound's tide-streams, which he knows 'like the back of his hand' from decades of crossing the narrow 1.5 mile channel to the family's sheep-farm on Stroma.

The conference was organised by CENSIS ... the Centre of Innovation for Sensor & Imaging Systems ... which brought together engineering and science researchers from all of Scotland's eleven Universities together with commercial industry and Government 'regulators' in a collaborative bid to see progress on manufacturing new 'sensors' and other related high-tech electronics products; those are aimed at supplying world-wide markets over the next five years.

Thurso-born Mr Duncan Bremner, a senior project manager with Glasgow University whom he joined after a career in the semi-conductor industry and Frenchman M Francois Muller, a research fellow at Thurso's ERI, were key organisers of the CENSIS event, which its board expects will stimulate several 'spin-offs' suitable for the tidal-stream and instrumentation industries.

A major theme of the conference was about adapting 'off the shelf' components from 'off the shelf' instruments already employed in the medical, fluid-flows, sea-navigation systems and computer games markets, for use by in devices for the 'new' marine energy field, rather than expensively 'starting from scratch'.

Mr Collier, who has a 'major projects' background in civil engineering, stated there was a requirement for devices that could accurately predict tidal flows and turbulence... and so help to maximise electricity output ... in the widely-varying conditions of the Inner Sound, but which should also be applicable to other 'high-flow' channels around Scotland, Europe and the rest of the World.

Professor Bryden suggested that an adaptation of 'Ocean Acoustic Tomography' (OAT), as developed by researchers at several Far East Universities over 20 years ago, could prove to be a profitable field of study development with direct positive results for projects such as the Inner Sound.

The director of Edinburgh University's 'FlowWave TT' test tank, which was officially opened this week, who is also a board member of the European Marine Energy Centre (EMEC) in Orkney, said that it should be possible to come up with a 'four dimensional' technology from that could accurately measure tidal flows in three dimensions, with 'time' added as the fourth constituent.

He added: 'This 'Coastal Acoustic Tomography' could hold out the prospect of being able to accurately predict tidal flows and turbulence over time in widely-varying swell and wind conditions'.

The Taiwan and Japanese 'ocean' system is based on the 'slicing' technology from medical CAT scans, but it is used to predict large scale movements of currents in major oceanic basins and is not so far refined to be suitable allow accurate predictions of tide-streams in narrow channels or straits and their 'turbulent' inter-actions with incoming swells and in different wind conditions. The initial technology, used in medical scanning applications, won the Nobel Prize for South African physicist Dr Allan Cormack, who was proud of his Canisbay, Caithness, ancestral roots.

The conference also heard from a representative of Pelamis Wave Power Ltd, the Edinburgh developers of the 'sea-snake' concept, about its efforts to obtain accurate data for its planned British-first 'wave energy converter' power station that it aims to install at Farr Bay, off the North Sutherland coast near Bettyhill, in 2017/18.

Others delegates considered how the unwanted 'arrival' of floating or semi-submerged debris at sub-sea tidal power stations (including huge fishing nets, floating shipping containers or loose logs, all lost overboard from passing ships) could be predicted and how any impacts on the rotating blades of tidal turbines with 'animate' wildlife including fish, whales and seabirds could be kept to the absolute minimum, if not completely avoided.

Said Mr Bill Mowat, of the 'mutually-owned' harbour that belongs to 600 residents of the North coast of Canisbay parish:- 'CENSIS should be congratulated in bringing this event to the Far North. Many people say that the instrumentation and measurement of liquid flows could be the most lasting legacy that Dounreay has left to the Caithness community from its generating days, so there should be opportunities in the coming years for suitably-qualified local persons in that segment of this new 'wave & tidal' field.

'I very much hope that two or three projects emerge as direct spin-offs from the event and that the Inner Sound visit helped concentrate minds on practical solutions for solving real problems there in the near future'.

'Clearly we in Gills Harbour Ltd ... it belongs to 600 electors living on Canisbay's Pentland Firth shoreline .. . also wanted to make delegates aware of its convenience for servicing all four of the Crown Estate's seabed 'tidal-stream electricity' leases in the Pentland Firth.

'Those all lie within 8 miles of here and can be accessed without the need for support vessels to transit tide-races, locally known as 'roosts' such as the Merry Men of Mey or the Bore of Duncansby , where breaking white-water waves occur on every day of the year on the appropriate daily 12.5 hourly tidal cycle'.

'We showed them the Harbour's Inner Basin, which vessel-owning marine engineering contractors tell us that they want to see deepened to at least 2.5 metres at Lowest Astronomical Tides (LAT) provide all-tides access and shelter for standard 25 metre long many-purpose 'multicat' vessels'

Andrew Banks showed them around the existing 116 metre Gills Harbour breakwater/berth, recycled from an internally and externally-strengthened former WWII floating dry-dock, and the site of its 70 metre extension. His company expects to install this unit during the present summer (2014) in line with its consent from Scottish Government regulator Marine Scotland. The extension will be 'offset' from the present one to allow marine renewables vessels to lie alongside without interfering with scheduled ferry movements; it will have a quayside low-water depth of c. minus 6 metres.

£10 million 'Isle of Jura' temporarily based at Gills Harbour in Far North of Scotland for her crew's debut tasks in the tidal-stream electricity field at the MeyGen sub-sea site, one mile off the little Caithness's port entrance channel.   One of the UK's most modern marine renewables service vessels made her debut calls at community-owned Gills Harbour, near John O'Groats, over the 2021 Spring Equinoctial weekend.
[Other Professional Services]
3/3/2021

Researchers in the north of Scotland and Wales are trialling a new method of measuring tidal currents which could revolutionise the marine renewables industry.  The project, led by scientists from the University of the Highlands and Islands, will use drones to film the movement of water then apply algorithms to determine its speed.
[Marine Services]
23/2/2021

Gills Harbour Ltd, the community-owned body that owns & operates the busy little port on Caithness's North Coast, has awarded a remedial contract to a Wick-based company.   The deal, won in a competitive tender, has gone to builders/civil engineers Messrs GMR Henderson Ltd, of Martha Terrace in Wick.