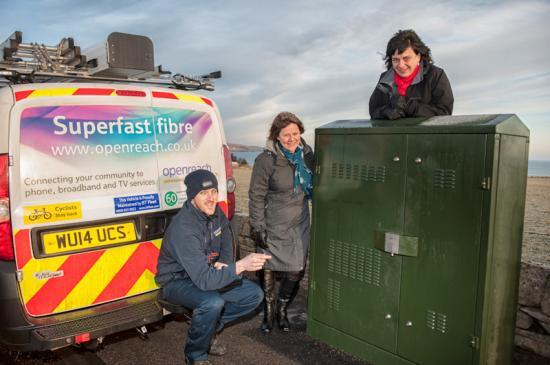 More than 6,000 homes and businesses in the two Caithness towns are able to order fibre based broadband now, with speeds of up to 80 mbps, delivered through the Digital Scotland Superfast Broadband project.

Services will be available to another 700 plus premises soon, as cabinets currently in the final stages of activation in Wick go live. (In the old Bignold Hospital and Louisburgh St areas of the town.)

This is just the start for the North which will see roll-out continue in the towns and across a number of new areas of Caithness in 2015.

Highlands and Islands Enterprise (HIE) is leading on the £146m partnership investment for the region which is bringing better broadband to rural communities. Funded by the Scottish Government, Broadband Delivery UK, HIE itself and private partners BT, the project is set to increase access to fibre based services from the 21% which would have seen rollout commercially to 84% of premises in the Highlands and Islands.

Deputy First Minister and Finance Secretary John Swinney said: "It's fantastic to see the project extending into places like Wick and Thurso, which will really benefit from the economic advantages fibre broadband brings, as well as the opportunities that it can bring to local communities allowing them to get online easily and quickly. It's a fundamental part of the Scottish Government's aim to deliver world class connectivity by 2020, and the arrival of fibre to the towns is helping to ensure that it happens."

Director of Digital at HIE Stuart Robertson, said: "We are delighted that the project has brought the first services to Wick and Thurso, and ahead of the roll-out schedule. Three quarters of premises in the two exchange areas can order and we've only just started in Caithness.

"The project is changing the future of digital access for Caithness and Sutherland - and without funding from the Scottish Government, BDUK, HIE and BT none of the towns or villages would have seen fibre roll-out."

BT Scotland director Brendan Dick said: "Bringing fibre broadband to our remote and rural communities is exactly what this project is all about. Wick and Thurso are typical of the kind of communities which stand to gain most from modern technology, despite the challenges we faced in building infrastructure in the far north of Scotland.

The project generally is being hailed as one of the most challenging in the UK and faced many different challenges creating the network, from overcoming the rugged terrain to burying hundreds of miles of backhaul cable across the region (one of the largest stretches runs from the west coast round NW Sutherland to Caithness). Latterly in Caithness and Sutherland the horrendous weather BT engineers faced was challenging, but, to their credit, they battled though it to deliver fibre broadband to Wick and Thurso ahead of schedule. (It was initially in the schedule for between April and June)

"This is another landmark for the partnership project because, while we already have fibre up and running in Shetland, Wick and Thurso are now home to the most northerly cabinets to go live on the Scottish mainland. The arrival of fibre broadband will play a huge part in the sustainable, economic and social development of both communities."

Potential customers can check availability with their internet provider. Also, there's an interactive map online where you can check your phone number or postcode for the latest information on roll-out.

There are two main parts to the roll-out across the region. The first is building a huge new network to bring fibre to places it has never been before, and then rolling out the local networks and connections needed to get it to homes and businesses.

The first local connections in Wick and Thurso have been delivered through ‘fibre to the cabinet' technology. Fibre is run to green cabinets and then services are delivered to homes along existing copper telephone wires.

Roll-out in the towns will continue. Some more of the existing cabinets still being processed will come through soon, and later this year the project will build new cabinets to cater for a number of customers who currently receive their services direct from the exchange.

Caithness Chamber of Commerce Chief Executive Trudy Morris highlighted the opportunities which the new services will offer over the coming years. "The availability of fibre to businesses and communities is increasingly important. It's a big part of many people’s daily lives, and can bring benefits in meeting the expectations of our customers, delivering services efficiently and in reaching new markets. The role of the internet is only likely to increase in the coming years and the introduction of a future proofed, resilient high speed network is key to allowing us to meet our ambitions."

High speed fibre broadband will be available to around 84 per cent of homes and businesses across the Highlands and Islands by the end of 2016.

The public sector investment is investing £126.4m through the Scottish Government broadband fund. That incorporates funding from BDUK and includes up to £12m from HIE’s own budget. BT is investing an additional £19.4 million in the project, on top of its commercial roll-out.

The project is one part of the Scotland wide £410m Digital Scotland Superfast Broadband project which aims to bring better broadband to 95% of premises by the end of 2017.

The Highlands and Islands project is about creating a vast fibre infrastructure across the region that offers a legacy for generations to come. The new fibre network will reach the majority of premises in every local authority area. Shetland, Orkney, Western Isles, Highland, Moray, Argyll and Bute.

Every part of the region is important. The rollout timetable has been designed to build out as quickly as possible from existing infrastructure - currently centred on areas such the Inner Moray Firth, Fort William and Oban where BT has invested in commercial rollout.

The timetable has taken account of many aspects including existing infrastructure, technical and physical feasibility, and ensuring the people of the Highlands and Islands get best value for the investment.

Locations to be upgraded are announced in phases as we progress. The reason for a phased approach is to ensure that the information we make public is as accurate as possible and we can provide a high degree of certainty.

We are not going to reach everyone in this first three year phased rollout. In some cases there will be people who can’t be reached even when their local exchange is upgraded. They will not be forgotten, and there are a range of initiatives already started to find solutions for people in hard to reach areas.

The new fibre backbone will reach deep into the Highlands and Islands and will make further expansion possible. BT and HIE will be assessing new and emerging technology options through an Innovation Fund, with a view to extending faster broadband to the most remote places.

The Scottish Government has launched Community Broadband Scotland to deliver support to rural and remote communities to help them deliver their own broadband solutions. CBS has been designed as a one-stop-shop to provide community groups with advice and information.

Cairngorm Estate owner, Highlands and Islands Enterprise (HIE), has responded positively to a request from stakeholders to extend the deadline, which was originally to be 31 August.   Deadline extended to 15 September.
[Advisory / Counseling Services]
2/9/2020

Businesses that meet the criteria will be eligible for both grants and a holistic business review with bespoke support based on their individual needs.   Carroll Buxton, deputy chief executive of HIE, said: "Hotels are at the heart of our tourism sector, which is central to our regional economy and a vital source of rural employment.
[Advisory / Counseling Services]
2/9/2020

Reaching new audiences through digital media will be the focus of free online workshops for heritage organisations being held over the next two months.   The first series of virtual events held in May and June proved popular with thousands of viewers during the lockdown.