Installation of underwater turbine and foundation structures at Pentland Firth: Notice to Mariners 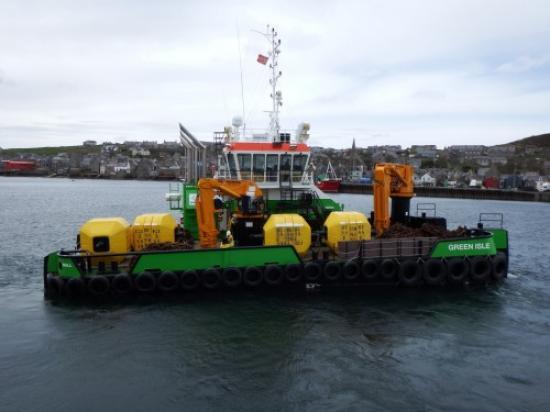 As you can see, this historic installation is to take place on the coming 'dead-tide' (i.e. neap) sequence, starting in the second half of the coming week.

I was speaking to Skipper Jason Schofield, MD of Green Marine (UK) Ltd of Stromness during the past week and he expected that Green Isle may be using Gills H as required during the operation in c. 30/35 metres of water.

For that workboat, it will be a case of her 'spanning the millennia' in terms of technology during a month.

Recently she accompanied a (leather) hide-hulled recreated Neolithic willow-framed boat, of the type that the first farmers are believed to have used to transport calves and grain-seeds seeds across the Firth. This was being filmed for an archaeology 'documentary'. The trip was from Hoy to Harrow ( Philip's Harbour) below the Castle of Mey.

The 21st century precision technology used in the manufacture/assembly of the 1.5 MW Andritz (Hammerfest) Hydro turbine, as was blessed at Nigg on the Cromarty Firth by Canisbay minister Rev. Lyall Rennie on Sept. 12th, is highly impressive and can be seen on-line.

The nearby Stroma (day) beacon is imminently due to be lit for the first time ever in c. 150 years; it is understood that NLB works there are all but complete.

The jack-up barge Neptune has arrive at Nigg from her home-port of Antwerp, Belgium. She was built for the offshore wind power-stations, but GeoSea, a subsidiary of Belgian offshore construction/ u-water 'dredge & build' specialists DEME believe that she is equally suitable for tidal-turbine work. (again see website). DEME recently became an Atlantis RL shareholder.

It was in 1907 that playwright/philosopher Irishman Geo. Bernard Shaw, still the only man ever to have beeen awarded the Nobel Prize as well as an (Hollywood film) Oscar , proposed harnessing the Firth's tides in a published paper for the (socialist) Fabian Society.

He considered that electricity from this source would free the UK's coalminers from physical danger, long-term heath problems and sheer drudgery of howking coal from narrow damp deep underground seams in darkness. A fellow-member at the time was Dr Gavin Clark MP who successfully proposed the legislation under which 'The Gills Bay Pier' (150 years long; 136 M) and who is now regarded as a 'hero' by Scotland two main political parties ( Scottish Labour & SNP) although the legislation was enacted by a Conservative administration.

GBS had crossed to Scapa Pier on his way to an angling holiday in Loch Stenness when he observed the power of the tidal streams from the deck of the first St Ola.

About Green Isle - information and photo from http://www.offshorevisie.nl/
With a length of 27.7 metres and a beam of 12.45 metres, the Multi Cat 2712 workboat, which was christened Green Isle, is a standard design with several modifications, i.e. a customised mooring system and Green Marine's own winches, which were installed by Damen and commissioned on board. The vessel has a speed of 10 knots, complies with the MCA CAT 1 workboat code and has a maximum bollard pull of 34.8 tonnes (average 33 tonnes). The workboat's basic functions for Green Marine will be anchor handling, installing wave and tidal energy devices, assisting barge operations, dredger service, supply, towing, hose handling and survey. For propulsion it is fitted with two Caterpillar C32 TTA ACERT engines with a total power of 1,790 bkW at 1,800 rpm.