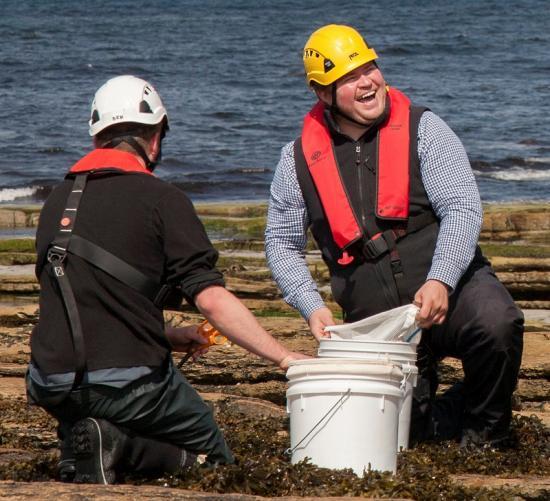 A Wick-based firm aims to expand production this autumn by recruiting casual workers to gather a forgotten food from the wild coasts of Caithness.

New Wave Foods has been sustainably harvesting high-quality seaweed for food over the last six months.
One of Scotland's most famous edible seaweeds is the deep red coloured dulse and it is just coming into peak season for harvesting.

Dulse thrives in the strong tides and crashing waves of the Pentland Firth, with the high water exchange providing it with all the nutrients it needs to grow.

It is a small and delicate plant, and so New Wave Foods is looking to take on more people to help with the harvesting effort.

Tom McGee is the company's Operations Manager and he's keen to hear from anyone wanting to know more about seaweed harvesting.

"This role will suit people who enjoy working outdoors and, of course, requires a willingness to brave the Caithness weather!

Hours will vary as we need to fit harvesting in with the spring tides; we may even have a place for someone that could only harvest at weekends."

Like other seaweeds, dulse is a versatile ingredient packed with minerals and protein.

It was an important food for coastal communities in Scotland for hundreds of years, being mentioned in records extending back to the time of Saint Columba in the 6th Century.

Dulse was a staple for crofters, who would include the seaweed in broths and porridge, and it was also chewed raw as a snack.

It was still popular in the Victorian era, with Charles Dickens recalling spending his pocket money on dried dulse during childhood holidays in Aberdeen.

Peter Elbourne - Operations Director of New Wave Foods - has heard stories from locals who remember picking dulse in their youth.

"When chatting to people in the area about seaweed, we sometimes stir up memories of harvesting around Caithness in years gone by. For example, dulse used to be harvested at Keiss and dried on the village green.

We're looking to pick Caithness dulse once again, although we’ll be taking it back to our factory in Wick to dry!"
New Wave Foods’ licences cover the north and east coasts of Caithness and there will be opportunities for people living near the sites to join in with the harvesting.

A Wick based superfood company has just scooped the top prize for its unique snacks.   SHORE The Scottish Seaweed Co.
[Food & Drink Products]
4/7/2020

SHORe the Scottish Seaweed Company (SHORE), the trading name of the Alness based seaweed processing company New Wave Foods Ltd, has expanded its product range having secured a £1.7million finance package.   The company has one of its bases at the industrial estate near Wick airport.
[Food & Drink Products]
4/11/2016

Wick based New Wave Foods is looking for more seaweed harvesters to help with increasing demand for their products.   New Wave Foods has been sustainably harvesting high-quality seaweed for food over the last six months.
[Food & Drink Products]
5/7/2016

The first batches of seaweed have been harvested and processed by a new food and drink business in Wick.   New Wave Foods has invested £240,000 at its newly fitted out premises on the Wick Industrial Estate with support of £60,000 from Highlands and Islands Enterprise (HIE).
[Food & Drink Products]
7/11/2015

A new food company aims to make good use of a resource that Caithness has in abundance - seaweed.   New Wave Foods has ambitions to become Scotlands leading processor of edible seaweed.