Could Bog Myrtle Be A New Cash Crop In The North? 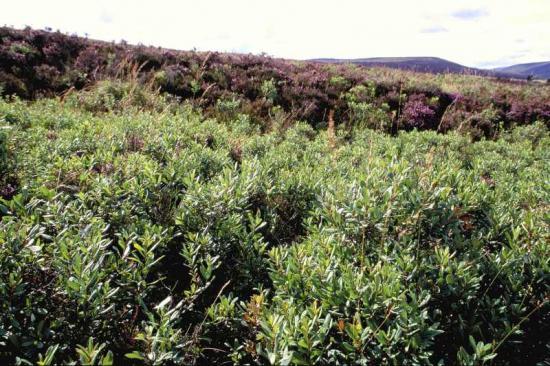 Plans for one of the UK's biggest cosmetic makers to turn bog myrtle into an income-earning crop have moved a step closer with approved funding of £201,000 from Highlands and Islands Enterprise (HIE).

Boots Company PLC has developed products using the essential oil extracted from bog myrtle, a native plant of the Highlands and Islands. Researchers at the chemists have discovered that bog myrtle oil has properties that slow down the skin ageing process and is effective in combating acne.

Trial products have been well received by consumers and Boots is keen to build on this to increase production. However, the essential oil used to date has been extracted from bog myrtle harvested from wild plants, and to achieve the increased production it is necessary to cultivate a significant quantity of the plant.

Boots intends to launch a range of products on the bog myrtle oil branded as 'Sweet Gale' which emphasises the natural origin of the product and is perceived more attractive to customers than the name 'bog myrtle'. There are plans to plant thousands of acres of the wild growing Highland shrub to provide as much oil as possible for the new products.

Although it grows all over the world, it is the Scottish variety of bog myrtle that seems to possess the particular anti-aging properties - down to the unique blend of conditions in which it grows.

In addition to the HIE grant, the UHI Agronomy Institute on Orkney is providing £94,000 and will be tasked with the research and development work to cultivate significant quantities of the plants.

Jeff Foot, head of commercialisation and investment at HIE, said: "We are delighted to be supporting this project which is needed to establish the development. A research study will ensure the industry develops quickly so that crofters, farmers and landowners can benefit as well as creating more jobs.

"Boots has a significant worldwide presence and aspirations to launch products incorporating bog myrtle oil through outlets in Europe, Asia and America and it's clear that the potential market for these products is enormous."

Jane Wood, head of public affairs, Scotland, said: "Because the plant occurs naturally in the Highlands, we can produce a much better product. We have found particularly effective strands of it in the Highlands and to grow it elsewhere wouldn't be the same. It has the potential to rival Australia's tea tree oil, which has become one of its most successful export products."

Boots has been working with Beauly company Highland Natural Products (HNP) which was set up in Beauly five years ago to exploit the medicinal properties of native plants.

Planning permission was granted yesterday for a 32,670 square foot site that will house a distillery, visitor centre and bonded warehouse.   The new micro distillery at John O'Groats has secured a grant from Highland and Islands Enterprise of Â£198,000.
[Advisory / Counseling Services]
17/2/2020

A Caithness company is planning to invest more than Â£2m in its Wick plant, in a move that could see up to 40 new jobs created in the town over the next five years.   Family-run Ashley Ann Ltd (AAL) designs and manufactures kitchens, bedrooms and bathrooms.
[Advisory / Counseling Services]
15/1/2020

The transnational project, called â€˜DisruptAqua', is worth â‚¬155,000 and is being supported by the European Union's Northern Periphery and Arctic Programme (NPA) 2014-2020.   As the demand for fish is increasing, the innovative use of existing and new technologies is required.
[Advisory / Counseling Services]
24/11/2019