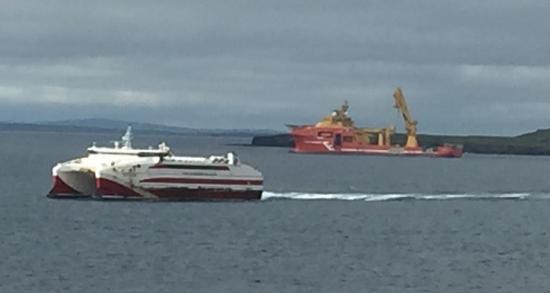 The massive 145.6 metre long heavy offshore support vessel Viking Neptun ... with a gross tonnage of 19,847 ... arrived in the Pentland Firth's Inner Sound on Friday July 20th from the Nigg Energy Park at the mouth of Scotland's Cromarty Firth.

The operation that has been timed to be undertaken during the current neap-tide cycle is taking place in the narrow channel just over 1 mile out from Gills Harbour in Canisbay.

The narrow strait between the Caithness mainland and the mid-Firth Isle of Stroma contains some of the fastest-flowing natural tide-streams off the coast of the British Isles and is the site of the presently world-leading 6 MW MeyGen 'demonstration tidal array' ... mini sub-sea power station.

It became operational earlier this year after a spending of over £50 million on the turbines, locally fabricated steel support structures, linking cables on the seafloor to the specially-constructed onshore landfall building at the Ness of Quoys, a stone's throw from Canisbay's historic medieval-origin, white-harled Kirk ... plus underground cables to SSE's 'local distribution network' sub-station near Bower, Caithness, 10 miles away..

Faults on two of the generator sets were discovered earlier this summer using remote sensors on the two turbines that will now be transported by Norwegian-owned Viking Neptun back to Global Energy's Nigg yard complex for modifications that could take two months to complete.

The third Andritz Hydro Hammerfest turbine ... devised by an engineering firm in the small town of Hammesfest in Norway's ice-free Arctic waters, honed in Glasgow by a Sottish Power Renewabes team and manufactured by Austrian-owned Andritz at its Revernsburg factory in SW Germany ... is generating electricity normally as is Atlantis's own AR 1500 turbine fabricated in the UK using designs partly supplied by US 'defense' engineering giant Lockhead Martin.

The two turbines are to be modified onshore at Nigg and are expected to be returned to the sea in about eight weeks time, after the necessary modifications are completed and tests concluded, the company states.

SAE has full Scottish Government consent ...through its agency Marine Scotland ... to install a larger-scale mini power station at the site that will require a further 40/50 turbines to complete. It is applying to HM Government for a small addition to be made to electricity-consumption 'bills' of domestic, business and industrial users under it Contracts for Difference (CfD) scheme in 2019 for the 80 MW project.

Tidal stream generation is a 'new' technology developed in the 2010s and is ... at this stage ... more expensive than some longer-established 'renewables' sources such as on-shore and offshore wind, solar roof- or ground-sited 'panels' etc.

The harbour is acknowledged by all industry experts as being the principal Scottish mainland base for work-boats ... costing up to £3.5 million each ... that have been much used for survey and various installation tasks for Pentand Firth/Inner Sound tidal-stream electricity prospects, including sub-sea cabling assistance, crew-transfer etc.

Yesterday he said: 'The MeyGen site is a 'world-first' demonstration project and it is aimed at proving that commercial-scale electricity can be generated by turbines converting the kinetic energy in the fat-flowing seawater into normal usable power supplies for folk living or with small businesses in the general John O'Groats peninsular area of Scotkland's Far North.

'It has been doing so for the best part of a year and it is not surprising that some modifications and upgrading of these two of these turbines has been shown to be necessary.

'We wish the company all success in getting this done'.

Next week Gills Harbour Ltd is expected to announce plans for a major upgrade of its facilities to take it up to the modern standards that vessel-owing/operating work-boat firms have indicated to them is necessary.

This follows a major analysis of a sustainable future for Gills Harbour, a study undertaken for GHL by one of Scotland's most eminent professional economists.

Presently Gills is best known as the mainland terminus for the busiest 'short sea crossing' of the Pentland Firth to St Margaret's Hope in Orkney.

Operators Pentland Ferries Ltd ... leasees from GHL and the Crown Estate ... are expected to see its brand-new British-designed larger £15 million 85-metre catamaran ROPAX ship arrive on station (late September/early October, 2018) to replace its present 2,800-tonne, 2008-built, catamaran Pentalina. At 70 metres, she has proven to be too small to meet passenger and freight demand on the thrice-daily, hour-long year-round trips.

The big offshore construction vessel Seabed Stingray (8,878 tonnes) arrived in the Pentland Firth's Inner Sound from the Cromarty Firth's Nigg Energy Park around 07:00 on Monday (15.10.18) morning with a very special cargo on board.   The 121 metre-long vessel was in the narrow strait between Gills Bay and Stroma Island to replace two of the four 'pioneering' tidal turbines that had been lifted out from SIMEC Atlantis Energy's MeyGen site last Summer for inspection and modification at Nigg.
[Marine Services]
11/6/2018