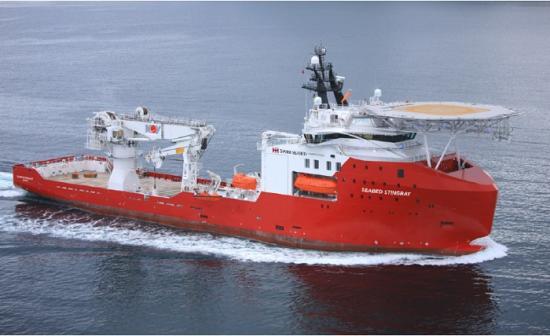 The big offshore construction vessel Seabed Stingray (8,878 tonnes) arrived in the Pentland Firth's Inner Sound from the Cromarty Firth's Nigg Energy Park around 07:00 on Monday (15.10.18) morning with a very special cargo on board.

The 121 metre-long vessel was in the narrow strait between Gills Bay and Stroma Island to replace two of the four 'pioneering' tidal turbines that had been lifted out from SIMEC Atlantis Energy's MeyGen site last Summer for inspection and modification at Nigg. The former massive North Sea oil-yard now famous as one of the major offshore 'renewables' shore-facilities in Europe.

The 35 metre deep Inner Sound normally carries fishing vessel and coastal cargo-ships ... as well as the busy trans-Pentland ferry Pentalina ... and an official 'notice to mariners' was publicly issued a fortnight ago warning that the vessel would be 'restricted in her movements' during restoration process taking place during the current neap-tides sequence; the moon's 'first quarter' falls on 16.10.18.

Most coastal and all intercontinental vessels sail through the choke-point Firth's main 2.5 miles wide 'shipping channel' between Stroma and Swona, the latter being Orkney's nearest isle to the Scottish mainland.

This was a Pentland Firth construction debut for the 2014-built Seabed Stingray that is Norwegian-registered, with her home-port in Bergen.

But the vessel is operated by an arm of one of Britain's most venerable ... and biggest ... private companies; Swire Seabed is a wholly-owned subsidiary of John Swire & Sons. It has grown to now employ c. 140,000 persons world-wide, since it was founded just over 200 years ago.

For over a century, this huge conglomorate .... although its has its formal HQ in the City of London ... has had its main, huge, business interests in Hong Kong, China and other Pacific Regions : it is perhaps best-known as the owner/operator of HK's famous Cathay Pacific airline. It initially began as a Liverpool-based trading house.

Almost a year ago (10.17), Swire took a three-year charter on he vessel then named Siem Stingray , operated by Subsea 7, the famous offshore engineering company in which Norway's Siem family are major shareholders.

The ship is described as an 'IMR ... Inspection. Maintenance and Repair ..., Construction and Survey' vessel. She has accommodation for over 100 persons; 34 single and 38 double cabins..

She has a helideck capable of regularly handling Sikorsky S 92s ... the North Sea's flying 'workhorses' ... and has a modern Kongsberg-supplied 'Dynamic Positioning' capability able to keep her 'still in the water' above the turbines' sea-bed mounted gravity supports thanks to her computerised, interlinked, Rolls Royce bow-thrusters.

Seabed Stingray is equipped with deck-cranes ... the biggest one has a 'heave-compensated' 250 tonne lifting capacity ... and has two through-decks 'moon-pools', one of over 7 metres square for launching/recovering key engineering components and the other (4.8 X 5.5 metres) for used by her small onboard fleet of sophisticated ROVs ... remote operated vehicles ... each with 'remote' lifting capacity.

For more information about Seabed Stinger go to -