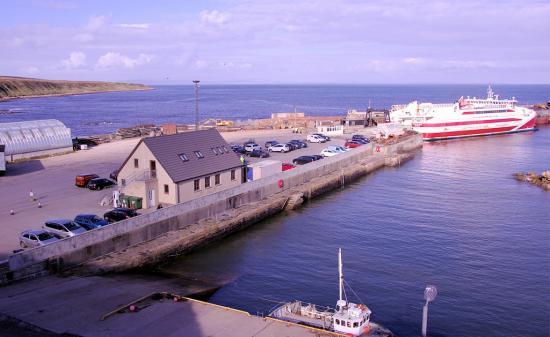 1) ECONOMIC DEVELOPMENT ZONE. Gills Harbour was confirmed in Autumn, 2018, as the core of 'The Gills Bay Economic Development Zone' in the Highland Council's CaSPlan, complied with local participation. It involved input from all other relevant state-backed bodies and public agencies. The new designation was endorsed by the Scottish Government in October, after detailed scrutiny by the latter's 'Local Planning Reporters Unit'. GHL regards this as a very positive step forward.

2) INNER BASIN WORKS ENDORSED. The above will be used to aid promotion of GHL's Inner Basin as the main Caithness 24/7 all tides/all weather support base/hub for work-boats ... often of the 24/26 metres LOA steel-hull class, known by the multi-cat trade-name ... and costing c. £3.5/£4.0 million as fully equipped new-builds for tidal-stream developers in the adjacent Inner Sound & nearby E. Pentland Firth waters.

It is those 'narrows' that the twice-daily reversible currents flow most swiftly and are thus most efficient at generating electricity, using the new turbines technology developed in the second decade of the 21st C.

Gills Harbour is (uniquely) conveniently located in-between the two major 'white-water on every day of the year' tide-races ... known locally as roosts ... that can seriously affect, or even put in danger, operations and manpower from such mini-ships in even moderately bad weather, with sea-sickness a known disincentive to technician recruitment/retention in all offshore 'renewables' projects/operations.

GHL is pleased to have had a ringing endorsement in Autumn, 2018, to its forward strategy from Mr Timothy Cornelius, CEO of SIMEC Atlantis Energy plc, (SAE), the developers of the MeyGen sub-sea tidal energy site c. 1 mile to 1.5 miles from its entrance channel. SAE is also internationally known as world-class designers/manufacturers of AR-series of tidal turbines.

The £3 million Inner Basin upgrading scheme has also won the backing of the owners/operators of the many-purpose workboats that have been involved in the pioneering project to date: such vessels' long-term involvement in marine energy projects in Far North waters was confidently forecast in an exhaustive mid-decade study that used actual (cost-saving) tidal works.

This was commissioned by Caithness-born Mr Calum Davidson, then Director of Energy & Low Carbon with 'local employment' agency Highlands & Islands

3) DEATH OF THE SHORT-SEA ROUTE'S PRACTICAL VISIONARY. January 26th, 2019, saw the passing of Alfred Banks, aged 87, the practical visionary behind the restoration of the historic 'short sea route' to its role as the most important freight and passenger sea-gateway linking Caithness with Orkney.

It re-commenced when the South Ronaldsay farmer & fodder miller/distributor persuaded his sea-Captain brother Bill to return 'home' to re-start a summer passenger & light-goods service from John O'Groats in 1971.

The Banks's and others fabricated a temporary, mobile, extension to the little John O'Groats Pier from a redundant crane-jib and water-tank. Then-owners Caithness County Council secured the first-ever European grant to come to the Highlands & Islands for its permanent concrete replacement, after the UK joined the Common Market in 1973.

It ran to St Margaret's Hope with a converted former WWII-vintage air-sea rescue craft that the Banks family refitted and renamed Pentalina.

'Alfie', as he always was known, played a key behind-the-scenes role when he and Orkney bus and transport businessman Jim Peace, (who had hired outside 'professionals' in 1988/90 as port designers/etc.) failed establish Orkney Ferries plc as running a viable RO:RO link eight miles across the Firth from Burwick to Gills Bay.

Mr Banks Snr. lost a reputed several tens of thousands of pounds when the 'Business Expansion Scheme' company ... that raised most of its money by public share issue ... went into administration in 1990.

Unbowed, he invested a major capital input when his son Andrew established Pentland Ferries Ltd in 1997 as a private family business. The rest is recent, successful, history confirming Alfie as the most important local sea-transport visionary of the 20/21st C.

Gills Harbour Ltd was represented at the funeral service when Alfie, for five decades a Kirk elder, was laid to rest in the kirk-yard of 17C. St Peters Church, in South Ronaldsay, on 02.02.19.

4) THE NEW GOOD-SHIP ALFRED. As most attendees will know, Pentland Ferries Ltd (PFL) family directors decided in Autumn, 2018, to name their brand-new 85 metre long, 3,000 tonne, catamaran vessel Alfred in his honour. Mr Andrew Banks was in late January out in the Far East supervising arrangements for the state-of-the-art British-designed ROPAX ship's launch when informed of his father's passing. The four-engine new-build vessel, that can take a load of 450 passengers with 100 cars (or alternatively 12 articulated trucks+ 54 cars) was entirely funded from internal company resources + a bank loan.

Alfred has three on-board generators plus four side-thrusters, all aimed at enhancing reliability. Scotland's newest ferry is expected to commence operations on the country's most successful 'mainland to island archipelago' route in early summer 2019. Launching is scheduled for late February.

5) GHL DEAL GOES TO LOCAL CONSTRUCTION COMPANY. Gills Harbour Ltd is pleased to have let a contract in early 2019 for the restoration of damage near the seaward end of 136 metre long Gills Pier to GMR Henderson ltd of Wick, who won a tightly-fought tender. This will restore damage substantially caused during the prolonged so-called Beast from the East storms of one year ago. It is grateful for Marine Scotland's co-operation & help. GHL also thanks the Greencoat Stroupster WF Community Fund for its help in the separate project to install solar-powered lamps on the Pier.

The above is confirmation of the shell-fishing interests in Gills H and its Inner Basin redevelopment scheme, one that will aid local fishers and local tourism pursuits, as well as parties involved in marine renewables, all as recommended by internationally-known economist Tony Mackay is his 2018 Gills Harbour Study.

6) NEW MOVES FROM S.A.E. EXPECTED SOON. All four 1.5 MW turbines were operating normally at the MeyGen site in early 2019, after an overhaul in Nigg's Energy Park, each generating a reputed £100,000 monthly sales income for SAE.

In February 2019, SAE announced a deal with Engineering Technology Applications (ETA) of Romsey, Hants. for designing & manufacturing a single 'hub' to allow multiple turbines to be connected with one sub-sea export cable to (here) the shore facility at Ness of Quoys, on Gills Bay. This is a necessary step for the long-term future of tidal stream power, if it is to become a reliable and cost-efficient competitor with other renewables sources, incl. offshore wind.

While SAE awaits the outcome of its bid for a UK Government 'Contract for Difference' for MeyGen Phase 1C (30+ turbines), expected in the summer of 2019, it is said to be contemplating a bond-issue to fully finance the 'demonstration' installation of two of its latest Atlantis AR 2000 turbines, each of 2MW, that have been designed in conjunction with US defence corporation Lockheed Martin. This is commonly known as Project Stroma and it is understood that some EU funding assistance may be on the cards, a source that could be soon 'kicked into touch' by Brexit.

The above could mean probable turbines installation in 2020 with work-boats being definitely needed during such operations.

It is in the interests of the whole of the Caithness, Scottish and British communities that the mini-power station, as per MeyGen Phase 1C, proceeds. That is, if the UK aspires to retain its world leadership in tidal-stream arrays in the face of fierce 'current' competition from, amongst others, France, Korea, China; the latter had two fact-finding delegations at Gills H. in late 2018.

Some potholes appeared after a frosty spell earlier this winter on the busy, main carriageway of the 'spur road' from the A 836 route to the Harbour-side. GHL is grateful for the prompt action by Wick-based Highland Council roads engineer Mr Jonathan Gunn and THC's local 'Direct Labour Squad' in remedying this problem.

Those have been contentious recently, but it is now possible to leave Kirkwall at 07:00 (weekdays) and arrive in Inverness at 12:50, with a minimum change-over time at Wick: but only partially vice-versa, leaving Inverness at 14:40 arriving at SMH via Gills H, but without a bus-link to Kirkwall.

Representatives from Stagecoach have stated at local bus user forums that they are in discussions with Pentland Ferries, with the former being requested to reinstate 'through ticketing' to/from Orkney for potential users from Central Scotland and all intermediate points in between. Services to/from Gills can no longer be directly booked through the (otherwise excellent) City-Link call centre.

One suggestion has been to retain the X 99 link at Dunbeath for Thurso, Scrabster via Halkirk, but continue the upwards X 99 beyond Wick via JO'G, Gills H, Mey, Dunnet and on to Castletown & Thurso, thereby maximising populations and tourism-related localities served.

Gills Harbour Ltd, the community-owned body that owns & operates the busy little port on Caithness's North Coast, has awarded a remedial contract to a Wick-based company.   The deal, won in a competitive tender, has gone to builders/civil engineers Messrs GMR Henderson Ltd, of Martha Terrace in Wick.
[Marine Services]
16/10/2018