TAX CHANGES, TAX TAKE AND TAX BASE - Why It Matters 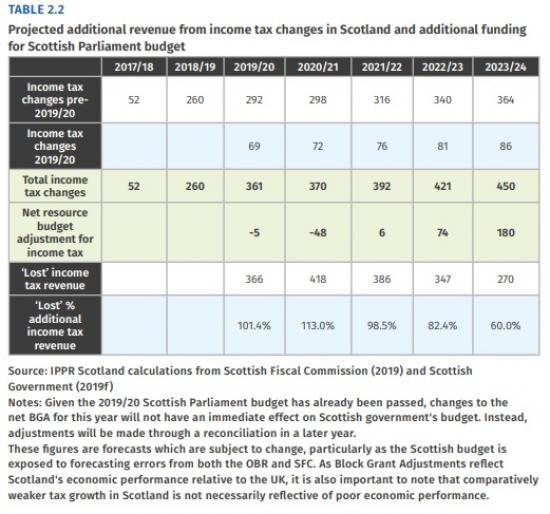 An excerpt on taxation in Scotland from the Institute for Public Policy Research the report out today 25 June 2019 - How productivity could deliver inclusive growth in Scotland.

UK (RUK) in policy areas devolved to Scotland, adjusted to take account of tax and benefit devolution. In the near future, the Scottish Parliament will also see partial assignation of VAT revenues raised in Scotland.

This means that tax performance for devolved taxes in Scotland has become very important to how much funding Scottish Parliament has to spend. In particular, under the current Fiscal Framework 3

Parliament budget (Scottish and UK Governments 2016). Therefore, given the link between productivity and pay described above, productivity growth will be integral to growing Scotland's budget.

Over the last few years the Scottish government has made a number of changes to the devolved income tax system, which have contributed to a growing divergence between income tax policy in Scotland and the rest of the UK (RUK). This has seen the introduction of new income tax bands in Scotland, including a new 19 per cent Starter Rate (set lower than the equivalent rate in RUK), a one per cent increase in tax rates for higher earners and a reduction in real terms of the higher-rate tax threshold, bringing greater proportions of taxpayers into the higher rate of tax.

Overall, this means that lower earners pay slightly less tax in Scotland than they would in the rest of the UK, with higher earners paying more.

In terms of tax revenues, this has meant that the Scottish government has been able to make tax rises in Scotland that increase tax revenues from the level they would otherwise be. Table 2.2 below shows the projected revenue raised by income tax changes in Scotland over the coming years (total income tax changes), together with the amount left over once adjusted for any differential in devolved income tax performance between RUK and Scotland (net budget adjustment for income tax). It also shows the difference between the two figures; the amount lost or gained

through differing devolved income tax performance in Scotland and RUK.

Table 2.2 shows that the Scottish Parliament will not see the full benefit of its tax changes in terms of the money it has to spend. Due to lower growth in tax revenue per head for devolved taxes in Scotland compared to RUK, the Scottish Parliament's budget in 2019/20 is projected to be £5 million worse off, despite the

Scottish government making income tax changes worth £361 million. Over time, the situation is projected to marginally improve. However, even by 2023/24, the Scottish government's budget will only be £180 million per year better off, despite 22 IPPR SCOTLAND | How productivity could deliver inclusive growth in Scotland income tax policy projected to raise £450 million in additional revenues. This will mean £270 million (60 per cent) of the revenue expected from tax increases in Scotland will be ‘lost' in 2023/24 due to poorer tax revenue performance in Scotland compared to RUK. Over the course of 2019/20 to 2023/24 Scotland will lose over £1.8 billion in cumulative terms due to poorer income tax performance compared to the rest of the UK.

Why are we seeing lost income tax revenue in Scotland?

Secondly, in the future, if Scotland sees fewer higher earners (whether due to moving residence or through being paid in dividends rather than earnings), this could reduce growth in devolved income tax revenue per head in Scotland.

However, it is far too early to see any evidence of unexpected behaviour change of this type within these figures, and indeed behavioural effects of this type have already been factored in to these projections. Most importantly, the differential between growth in income tax revenue per head in Scotland and RUK is likely to be dictated to a large extent by wage growth in Scotland compared to RUK. Therefore, productivity growth in Scotland, given its

links to pay growth across the economy, will be incredibly important to the budget available to the Scottish Parliament in the future.

Read the full report at - https://www.ippr.org/research/publications/how-productivity-could-deliver-inclusive-growth-in-scotland