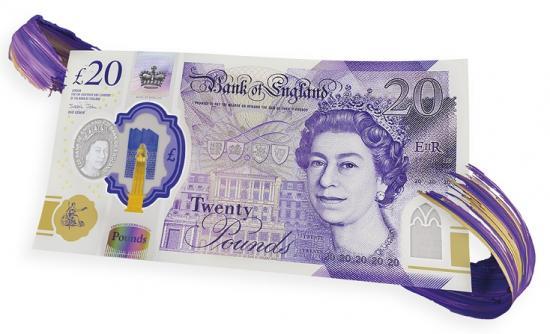 Mark Carney, Governor of the Bank of England launched the new £20 note today.

The new £20 note celebrates Turner, his art and his legacy in all their radiant, colourful glory. The design features Turner's self-portrait, from 1799, alongside one of his most eminent paintings, The Fighting Temeraire.

This painting is a tribute to the HMS Temeraire - which battled with distinction during Nelson's victory at Trafalgar in 1805 - and an elegy to the decline of sail, showing the great warship being pulled by a steam tug to her last berth to be broken up for scrap. The novelist William Makepeace Thackeray called it "as grand a painting as ever figured on the walls of any academy, or came from the easel of any painter".

The public clearly agrees, voting it Britain's greatest painting in a BBC poll in 2005. The Fighting Temeraire exemplifies Turner's innovative use of light, shade, colour and tone. These contributions to the visual arts are captured in the quote - ‘Light is therefore colour’ - which is from an 1818 lecture by Turner.

Turner rarely signed his paintings, so the signature on the banknote was taken from his will. That is fitting because, in a codicil to that testament, he bequeathed his paintings to the nation, and in doing so made a significant contribution to British society. Few Turners are locked away in private collections or spread to thefour winds. The vast majority are free for the British public to see across some of our greatest galleries.

The note references several of these galleries. A small purple foil on the reverse side of the note echoes the spiral staircase at Tate Britain, which holds most of the Turner Bequest in the Clore Gallery. The main foil of the note contains an image of Turner Contemporary in blue. And the shape of the window around the foil is based on the Trafalgar Fountains, which are an iconic feature in the square outside The National Gallery where The Fighting Temeraire hangs.

The purpose of design features like these is not simply to make the banknotes beautiful but also to strengthen their security.

The new £20 will be our most secure note yet, featuring several innovative elements. For example, rather than having a single foil element – the Turner Contemporary in blue – there is an additional foil in a second colour: the Margate Lighthouse in gold. And there is a second transparent element in the bottom corner of the note, inspired by the windows of Tintern Abbey, which was a popular tourist spot in Turner’s times and which he memorialised in another of his great watercolours in 1794.

These security features are made possible by printing the new £20 on polymer, rather than paper. Polymer banknotes also remain in good condition for longer, meaning the new £20 will be safer, cleaner and stronger.

The varied colour of our banknotes also plays an important role in making the nation’s money as inclusive as possible. Features like the differing colour palettes, differing sizes and raised print enable those who arevisually impaired to recognise different notes. As with the new polymer £10, the new £20 will also include a tactile feature – a series of raised dots in the upper left-hand corner – to improve accessibility further.

Turner was a frequent visitor to Margate, drawn by "the skies over Thanet", which he held to be "the loveliest

in all Europe". The East Kent coast inspired more than 100 of his works and this gallery stands on the site of

Mrs Booth’s seafront guesthouse, where Turner stayed whenever he visited.

Turner’s contribution to art extends well beyond this stretch of shoreline. He was precocious – exhibiting at

the Royal Academy at 15, and becoming an Academician at 24 – as well as prolific, producing more than

through use of vibrant colour and flowing brushwork; he often went to extremes in pursuit of the visceral

artistic experience. His paintings blaze with the heat of the sun, shimmer in moonshine, and rumble under

the weight of gathering storm clouds.

These works transformed the field of landscape art. Before Turner, landscapes were generally viewed as

subjects unworthy in their own right; their role was merely to provide backdrop to the real action. Turner

something of its spirit.

Turner also used art to hold a mirror to the technological and social transformations happening around him.

Masterpieces such as Rain, Steam and Speed – The Great Western Railway captured the advent of the

steam age. The Slave Ship reflected on the moral preoccupations of his times.

The artistic developments that Turner pioneered resonated well beyond his lifetime, providing inspiration to

the Impressionists and leading Mark Rothko to joke “This man Turner, he learnt a lot from me”. A

Indeed, Turner’s legacy endures today through his influence on art for over two centuries, to the prize that

bears his name to celebrate British contemporary art, to this magnificent gallery, the Turner Contemporary.