The Highlands named deadliest area for drivers in Scotland 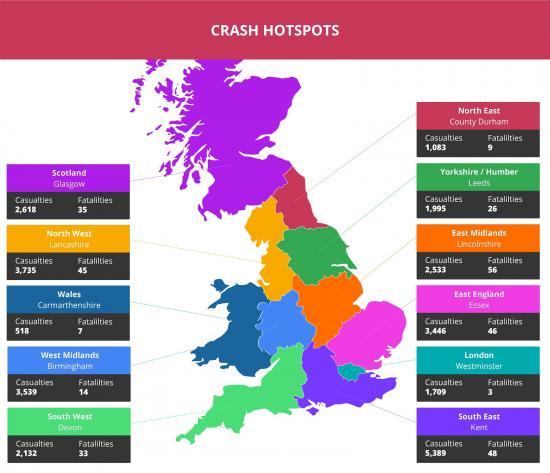 New analysis reveals the deadliest parts of the UK for car accidents, along with the most dangerous transport methods and police attendance rates.

Glasgow, Edinburgh and the Highlands are the most dangerous areas in Scotland, with 2,618 casualties and 35 fatalities reported between them in 2018.

Scotland has experienced 131,622 casualties and 2,083 fatalities over the past decade, new research shows.

Police attendance to fatal road accidents has dropped by 8% since 2017.

Analysis by car specialist AMT of newly-released government data reveals the safest and most dangerous areas in the UK for casualties and deaths on the roads.

It shows that Glasgow, Edinburgh and the Highlands are the worst areas for traffic incidents in Scotland, with 2,618 casualties and 35 fatalities reported collectively between them over the past year. Glasgow reported 1,138 of these casualties and 10 fatalities.

This places Scotland as the third safest region for drivers overall last year, having reported 8,394 casualties and 160 fatalities in 2018.

This places the North West as the third most dangerous region for drivers overall last year, having reported 17,101 casualties and 194 fatalities in 2018.

Kent, Surrey and Lancashire are the worst counties in the UK overall, with 13,296 casualties and 120 fatalities reported in 2018.

Using brand new data from the Department for Transport, the analysis reveals that, despite car occupants accounting for the most road deaths (44%) in 2018, motorbikes remain the riskiest transport, with 16,818 casualties and 354 fatalities reported - a slight increase from 349 last year.

Meanwhile, 777 car occupants and 456 pedestrians were killed in 2018. Cyclist deaths saw a slight decrease compared to 2017 with 99 fatalities. Rural roads are the deadliest in the UK, having accounted for 58% of all fatalities in 2018.

Child pedestrians aged 15 and below are the most vulnerable in traffic collisions, with the number of fatalities reported over the last year showing a 27% increase compared to 2017. There were 1,276 serious injuries caused to child pedestrians reported in 2018 - equating to more than three per day.

Despite Road Traffic Forecasts predicting an increase of between 11% and 43% in traffic in all areas across the county before 2050, overall police attendance to road accidents has seen a steady decline of 8% over the past five years.

Based on the average percentage change in the number of road incidents over the past ten years, there are set to be 1,692 fatalities and 150,522 casualties reported across the UK in 2020. This represents a 6.28% reduction in casualties and 5.05% drop in fatalities compared to current figures.

This regional-level analysis is critical, as there are still more than 5,500 miles of road - 2% of Britain's road network - with a total lack of mobile phone signal coverage, making it impossible to call for help.

For more information on reported car casualties and fatalities in the UK, please visit : https://www.amtauto.co.uk/blog/england-crash-hotspots-revealed-2019