Budget Or No Budget, With Borrowing Now On The Rise Again Fiscal Realities Can't Just Be Wished Away 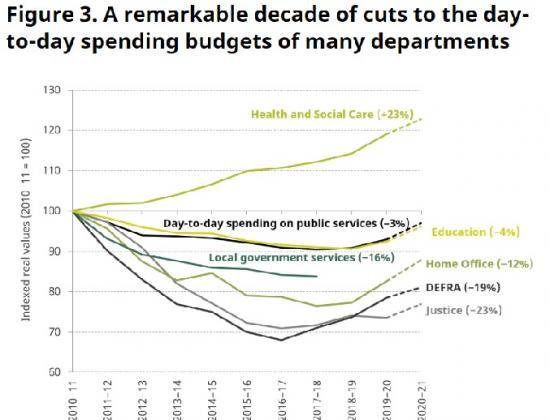 From the Instutute for Fiscal Studies report.

Today (6 November 2019) was the intended date of Sajid Javid's first Budget as Chancellor. The failure to implement a Brexit deal, and the general election campaign, means that the Budget has been delayed. Much has changed since the last set of official economic and fiscal forecasts were produced by the Office for Budget Responsibility (OBR) last March. So had it not been delayed what would the fiscal backdrop to today's Budget have been?

No doubt the chancellor would have been keen to point out that reductions to borrowing since 2009-10 have meant that in 2018-19 borrowing in cash terms was back to the level seen in 2007-08. Measured as a share of national income, borrowing in 2018-19 was 1.9%, its lowest share since 2001–02. This is about in line with the average rate of borrowing seen over the period from the end of the Second World War through to 2007–08.

Mr Javid might have been less keen to highlight the changing outlook for borrowing over the next few years. Back in March the OBR forecast that borrowing would continue to fall (albeit being some way off meeting the Government's supposed overarching fiscal objective to eliminate the deficit by the mid-2020s). Since then, as shown in Figure 2, the outlook for borrowing has risen, driven by two factors:

First, the Office for National Statistics have implemented significant classification and methodological changes – most notably a welcome improvement in the fiscal accounting of student loans. Tomorrow the OBR will publish an update on its estimate of these – showing how they would have affected its March forecast. Figure 1 shows the estimate we included in last month's IFS Green Budget (including the effects of the student loan change and other changes to public pension accounting and recording of corporation tax receipts), the effect of which was to push up measured borrowing by an average of almost £20 billion a year over the next five years.

Second, in September Mr Javid announced the outcome of his Spending Round for the coming financial year. This included a substantial £13 billion boost to the day-to-day budgets of central government spending departments, with no attempt to finance these from higher taxes or cuts elsewhere. This adds to borrowing next year. We don’t know what spending plans will be after that but even if we assume that extra money is only made available to meet commitments on health and schools then borrowing would also be higher in subsequent years.

After incorporating these (and some other, less significant) adjustments, our Green Budget forecast was for government borrowing to breach the Government’s 2% ceiling on borrowing in 2020–21, and that in 2023-24 it would be at 1.9% of national income – the same rate as in 2018–19. If correct, this would mean the end of the era of deficit reduction, with the UK running a deficit around its historical average.

If the Bank of England reduces its growth forecasts in its inaugural Monetary Policy Report to be published tomorrow then our public finance forecasts will of course change and we will update in the light of new information.

Read the full article at https://www.ifs.org.uk/publications/14545