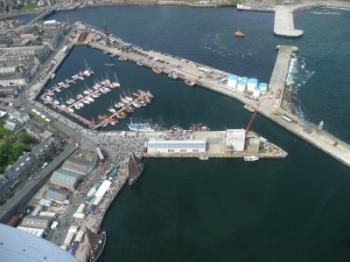 Situated on the northeast tip of mainland Scotland at 58 26.5' N, and 003 04' W, and for the last 150 years has provided a safe haven for fishing, commercial, and leisure vessels.

Many photos of Wick Harbour can be seen here

Today at Wick Harbour 'Rix Lynx'could be seen tied up.   Wick Harbour is fast becoming a hive of activity with the work now well underway at the former Steven's yard.
[Builders & Building Services]
17/3/2017

Influential energy trade body Energy North has unveiled an ambitious new two-year business strategy which will see the organisation grow its physical presence and increase its support for member businesses and industry development across the North of Scotland.   Over the coming months Energy North is to recruit three regionally-based area developers covering Caithness, Ross-shire and Inverness, Moray, Aberdeen City and Aberdeenshire, and Argyll and Lochaber, with chief executive, Ian Couper leading on Shetland, Orkney and the Outer Hebrides.