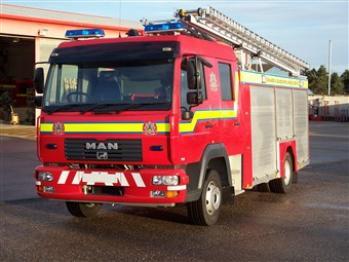 Retained Station
This station is normally staffed by up to 20 personnel working on a retained duty system. It is provided with 2 fire appliances which are equipped to deal with all types of emergency including structural fires and road traffic collisions.

All of the staff are trained in responding to these incidents. As part of their work, staff are also heavily involved in community fire safety activities, which includes carrying out Home Fire Safety checks.

Ward Forums across Highland focus on Police and Fire Services

A series of 19 Highland Council Ward forums are being held across the Highlands to seek the views of the public on local police and fire services.   The first meetings are being held at Portree and Golspie on Monday 2 September and they run until 30 October.
[Local Authority]
3/7/2013

Members of the new Scottish Fire and Rescue Service (SFRS) have been announced by Community Safety Minister Roseanna Cunningham.   They will work closely with the Chair Pat Watters and Chief Officer Alasdair Hay to oversee, support and challenge the SFRS and ensure smooth transition to the new single service, which will go live on April 1, 2013.
[Other Public Services]
18/10/2012

Issued by Highlands and Islands Fire and Rescue Service.   Around this time of year people will be preparing for Bonfire night and young children in particular will be looking forward to the evening.
[Other Public Services]
30/8/2012

Public agencies in the Highlands are leading the way in reducing carbon emissions from travel by using electric cars and vans for business use.   In addition, the electric vehicles are expected to generate significant savings in both running costs when compared to hiring a regular car.
[Other Public Services]
16/8/2012

Alasdair Hay will be the first Chief Officer of the new single Scottish Fire and Rescue Service.   The post will be one of the top fire jobs in the UK and one of the most demanding and high-profile roles in civic Scotland.
[Other Public Services]
11/5/2012

Message from Deputy Chief Fire Officers Friday 30th March marked the end of a series of Fire Board meetings which have allowed a clearer and more positive direction to be defined for the Service and the communities we serve.   We are committed to keeping the communities of the Highlands and Islands up to date on the debate and outcome of these meetings.
[Other Public Services]
27/2/2012