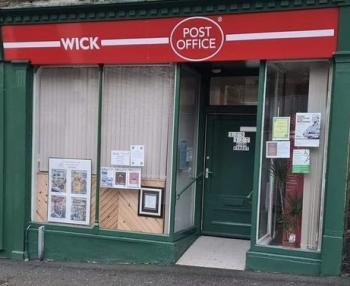 Wick Post Office has move to Mobile service and moves again on 7 January 2021 to the former Social Work Building.

From Wikipedia, the free encyclopaedia
The General Post Office (GPO) was officially established in England in 1660 by Charles II and it eventually grew to combine the functions of both the state postal system and telecommunications carrier. Similar General Post Offices were established across the British Empire. In 1969 the GPO was abolished and the assets transferred to The Post Office, changing it from a Department of State to a statutory corporation. In 1981 the organisation was split into separate Post Office and British Telecommunications corporations. For the more recent history of the postal system in the United Kingdom, see the article Royal Mail and Post Office Ltd.

Originally, the GPO was a monopoly covering the despatch of items from a specific sender to a specific receiver, which was to be of great importance when new forms of communication were invented. The postal service was known as the Royal Mail because it was built on the distribution system for royal and government documents. In 1661 the office of Postmaster General was created to oversee the GPO.

Early postal services
The GPO created a network of post offices where senders could submit items. All post was transferred from the post office of origination to distribution points called sorting stations, and from there the post was then sent on for delivery to the receiver of the post. Initially it was the recipient of the post who paid the fee, and he had the right to refuse to accept the item if he did not wish to pay. The charge was based on the distance the item had been carried so the GPO had to keep a separate account for each item. In 1840 the Penny Post was introduced, which incorporated the two key innovations of a uniform postal rate, which cut administrative costs and encouraged use of the system, and adhesive pre-paid stamps.

The Post Office has launched a £20m Community Branch Fund to help secure the long-term future of branches in villages and remote communities, and underpin their crucial economic and social role.   As the traditional banking network declines, community branches are critical in enabling local people to maintain access to the majority of high street banks, along with a wide range of other Post Office products and services.