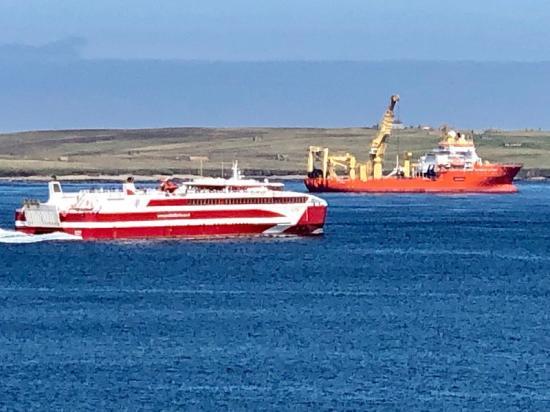 Here is the Normand Cutter, the Norwegian-owned offshore construction vessel that has been the base for works on Simec Atlantis Energy's (SAE's) MeyGen site in the Pentland Firth's Inner Sound, off Gills Bay during the current neap-tide sequence, that has lasted most of the week commencing 11.08.20.

Picture by retired C of S Kirk Minister the Rev Lyall Rennie, who lives at Lower Warse, Canisbay, on the shores of Gills Bay.. Rev Rennie had indicated his intention of standing down as Hon. Sec. of community owned Gills Harbour Ltd, that runs the little port on the Inner Sound's shoreline part of which is leased to Pentland Ferries Ltd. This is its mainland base for the thrice-daily service by the 85m long, 2019-built MV Alfred to St Margaret's Hope, South Ronaldsay across the ancient 'short sea route' 15 miles to Orkney.

The 200 m long main ferry pier at Gills is an object-lesson in recycling. It is composed of two former one-time floating RN dry-docks of WWII vintage that have been internally and externally strengthened and filled by dredged bedrock and laid on a prepared levelled seabed.

There has been no call on UK taxpayers' funds for capital and operating costs , making this Scotland's most successful 'Mainland to Island group' service.

The British-designed vessel was picked at the world-wide 2019 Ferry of the Year in a contest hosted by a key trade publication staff.

The tidal stream electricity generating station less that 1.5 from Gills has old electricity worth over £4 million in the last financial years according to SAE's annual report. Its MeyGen site is the largest in operation anywhere in the world and it was shaped bysubsea data provided by survey vessels operating from Gills Harbour.

Pentland Ferries has announced that the company's new ship, Alfred, left the yard in Vietnam, yesterday morning, Thursday, to start the long voyage home to Orkney.   Director of Pentland Ferries, Kathryn Scollie, said: "We are delighted that the MV Alfred is now on her way.