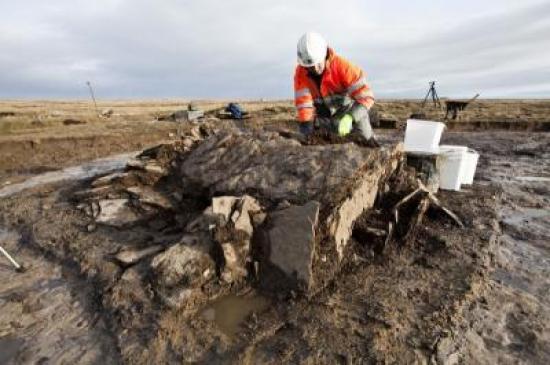 Getting rid of Britain's 20th century experiment with fast breeder nuclear reactors is illuminating the history of human settlement on Scotland's north coast stretching back 6000 years.

Archaeologists hired as part of the closure of the nuclear site at Dounreay have pieced together the legacy left by previous generations who occupied the site as long ago as 4000BC.

Headland Archaeology Ltd spent September and October excavating open ground adjacent to the redundant nuclear site that is earmarked for the disposal of low level radioactive waste from its decommissioning.

Their digging found the remains of a cairn - a stone-covered cist used to inter bodies, often with their jewellery and weapons - thought to date from the Bronze Age (circa 2300 - 700BC).

The cairn had been disturbed and emptied at some point in the past. The only remaining artefact discovered was a flint flake.

A nearby Neolithic cairn discovered in 1928 with the bodies of five people inside is already fenced off and protected by law as a Scheduled Ancient Monument. It dates from 4000BC.

Headland has interpreted the area's archaeology in posters. These are now on display in Thurso at the Dounreay.com public information centre and Caithness Horizons exhibition.

Dounreay heritage officer James Gunn said: "The work carried out by Headland adds to the knowledge of the site and boosts the legacy of information we can leave behind when the nuclear facilities are gone."

The site of the archaeological excavation is earmarked for development as a shallow repository for up to 175,000 metres3 of solid low-level radioactive waste from the clean-out and demolition of the reactor experiment.

Dounreay Site Restoration Ltd announced in January that Graham Construction had been selected as its preferred bidder for the design and construction of the facility, with a formal award of contract due later this month.

Subject to regulatory and other consents, construction of the first two vaults is scheduled to begin in the autumn and take two years to complete.

The facility will enable DSRL to clear all the low-level radioactive waste from the site and dispose of it in a way that protects future generations.

The Nuclear Decommissioning Authority has today published its fourth Draft Strategy and begun a 12-week public consultation.   The NDA regularly reviews its Strategy to ensure it has the right approach to decommissioning its 17 nuclear sites and benefits from the latest learning, best practice and can continue to deliver value for the taxpayer.
[Other Public Services]
12/8/2020

Dounreay is exploring ways of decommissioning with the help of robotics experts.   The nuclear site at Dounreay, which was the centre of the UK's research into fast reactor technology in the last century, is being cleaned up and taken apart.