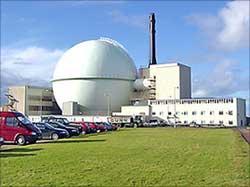 UKAEA is responsible for safely decommissioning the nuclear facilities at the Dounreay plant and restoring the site for future use.
See Caithness.org section on Dounreay

Dounreay’s radioactive impact on the environment continues to fall, according to a report.  The annual survey report “Radioactivity in Food and the Environment” (RIFE 2012) has recently been published and it can be read here - http://www.sepa.org.uk/radioactive_substances/publications/rife_reports.aspx The report uses data obtained from samples of air, fresh water, grass, soil, and locally sourced meat, fish, milk and vegetables during 2012.
[Other Public Services]
6/4/2012

57,000 Tonnes Of Hazardous Materials Finally Dealt With At Dounreay

Dounreay today completed the destruction of one of the most hazardous legacies of Britain's earliest atomic research.  A purpose-built chemical plant processed the last of 57,000 litres of liquid metal lifted from the primary cooling circuit of the experimental fast breeder reactor.
[Advisory / Counseling Services]
24/3/2011

Cash from the closure of the fast reactor site at Dounreay is set to breed a new generation of engineers and scientists in the Scottish Highlands.   The money from the Nuclear Decommissioning Authority will fund half the cost of a Ł50,000 project to increase the number of school-leavers skilled in science, technology, engineering and maths.
[Advisory / Counseling Services]
24/3/2011

The Nuclear Decommissioning Authority has published the latest edition of the UK's radioactive waste inventory.   This sets out the type and volumes of radioactive waste at sites such as Dounreay, as of April 1, 2010.
[Advisory / Counseling Services]
24/3/2011

The clearance of tens of thousands of tonnes of radioactive waste from the redundant nuclear site at Dounreay today moved a step closer.   Dounreay Site Restoration Ltd announced the formal award of a contract to develop a disposal site for low-level waste from the decommissioning and closure of the site.
[Advisory / Counseling Services]
24/3/2011

Getting rid of Britain's 20th century experiment with fast breeder nuclear reactors is illuminating the history of human settlement on Scotland's north coast stretching back 6000 years.   Archaeologists hired as part of the closure of the nuclear site at Dounreay have pieced together the legacy left by previous generations who occupied the site as long ago as 4000BC.
[Advisory / Counseling Services]
24/3/2011

Bosses at Dounreay agreed that they won't now be spending Ł500,000 on a repaint of the sphere.   They money saved will go instead towards actual decommissioning work.
[Other Public Services]
23/12/2010

THE CROWN ESTATE REAPPOINTS CHRIS BARTRAM, AND APPOINTS DIPESH SHAH OBE AND ANTHONY WHITE AS NON-EXECUTIVE BOARD MEMBERS The Crown Estate has announced yesterday, 22 December 2010, the re-appointment of Chris Bartram and the appointment of Dipesh Shah and Anthony White as Non-Executive Board Members.   Chris Bartram, who has held the appointment as Crown Estate Board Member for four years has been reappointed for a further four year term with effect from 1 January 2011.
[Other Public Services]
7/11/2010

The November issue of the site newspaper, Dounreay News, has now been published and is also available online.   www.dounreay.com/news/2010-11-03/dounreay-site-newspaper-for-november-online .
[Other Public Services]
7/11/2010

Four experts from the Autorité de Sureté Nucleaire, the French nuclear safety inspectorate, spent a day at Dounreay discussing the decommissioning of alkali metal cooled fast reactors.   The visit was hosted by the Nuclear Installations Inspectorate as part of international collaboration over nuclear health and safety matters.