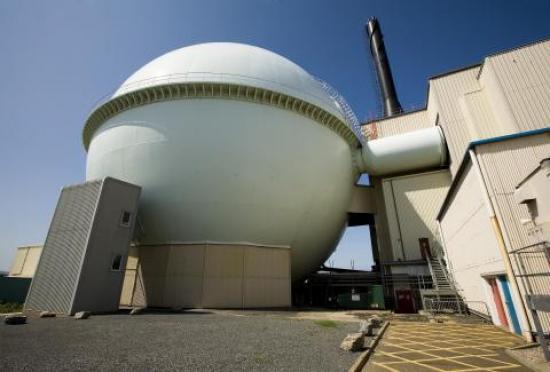 Bosses at Dounreay agreed that they won't now be spending Ż500,000 on a repaint of the sphere.

They money saved will go instead towards actual decommissioning work. The sphere's been repainted every 10 years for as long as anyone can remember. And the cycle is repeated every decade of the lifetime plan for the site.

Its next coat was due over the next 18 months or so. But that's been changed after
DFR paint job scrapped "This looks like a ludicrous waste of public funds," Highlands and Islands MSP Dave Stewart told The Sun. the decision last year to scrap the
sphere once the reactor is decommissioned.

The steel is thick enough to last a lot longer than the time it will take to dismantle the reactor.

14 successful companies have been awarded contracts to come up with innovative approaches to remotely sort and segregate radioactive waste.   The ŌĆśSort and Seg' innovation competition, worth ┬Ż3.9 million in total, was launched in July 2020.
[Advisory / Counseling Services]
28/1/2021

Work on Dounreay's newest radioactive waste store went up a storey last week, with the completion of a ŌĆśmega' concrete pour.   The construction project was one of the first to re-start work on 22 June, following the easing of lock down restrictions.
[Advisory / Counseling Services]
6/11/2020

Dounreay has awarded a major contract as the world's deepest nuclear clean-up job gets underway.   Dounreay Site Restoration Ltd (DSRL), on behalf of the Nuclear Decommissioning Authority, awarded the ┬Ż7.5 million contract for "advanced transition works" at the 65 metre deep shaft and silo to Nuvia and its partner Graham Construction, through the site's decommissioning framework following a competitive tendering process.
[Advisory / Counseling Services]
8/9/2020