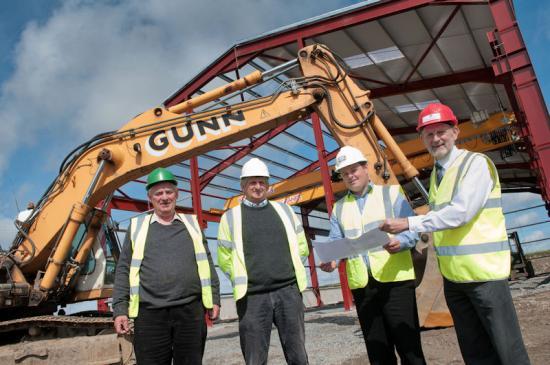 AMC Engineering Ltd, whose head office is at Findon just outside Aberdeen, is set to expand their Caithness division by building a new workshop at their site outside Lybster, with the assistance of a grant of £76,250 from Highlands and Islands Enterprise (HIE).

Managing Director Andrew Polson, who hails from Caithness and whose parents still live on the family croft at Smerlie next door to the company's workshops, explained that the skill and application of the local work-force was a key factor in deciding to site the new workshop in the north.

He said: "HIE's support was crucial in helping us go ahead with this development, which wouldn't have happened without their assistance. The work we do, manufacturing a range of high-precision torque equipment for the global oil & gas industry, is highly specialised and it is a tribute to the quality of the Caithness workforce that we have decided to locate this investment here. The project will help us supply our new sales and service base in Houston, Texas, and set us up for our further expansion into the Pacific rim and the Middle East."

Andrew, who moved to the Aberdeen area and started with AMC in 1994, took over the firm when the previous owner retired in 2004, and has since driven its rapid expansion to become a multi-million pound business with customers around the globe.

HIE area manager Roy Kirk said: "HIE is very pleased to be supporting this project, as AMC Engineering is exactly the type of company we want to see growing in our area, building on the County's reputation for excellence in engineering, and providing local people with real employment opportunities. As a native Caithnessian now living in Aberdeen, Andrew has been involved with our Caithness Ambassadors programme which aims to promote inward investment into the County, and with this development he is clearly putting his money where his mouth is by choosing Caithness as the site for this expansion."

Work is already under way, with John Gunn and Son of Lybster carrying out site works, and the whole project is due for completion by the end of September.

Planning permission was granted yesterday for a 32,670 square foot site that will house a distillery, visitor centre and bonded warehouse.   The new micro distillery at John O'Groats has secured a grant from Highland and Islands Enterprise of Â£198,000.
[Advisory / Counseling Services]
17/2/2020

A Caithness company is planning to invest more than Â£2m in its Wick plant, in a move that could see up to 40 new jobs created in the town over the next five years.   Family-run Ashley Ann Ltd (AAL) designs and manufactures kitchens, bedrooms and bathrooms.
[Advisory / Counseling Services]
15/1/2020

The transnational project, called â€˜DisruptAqua', is worth â‚¬155,000 and is being supported by the European Union's Northern Periphery and Arctic Programme (NPA) 2014-2020.   As the demand for fish is increasing, the innovative use of existing and new technologies is required.
[Advisory / Counseling Services]
24/11/2019